Don Quijote and Sancho Panza seem inseparable. But at the heart of their relationship is the servitude of the latter, employed as s/he is by the former. They are constantly together and depend on each other, yet they have difficulties of communicating. This seems an ordinary conversation, yet, as such, an implicit philosophy of communication emerges from it. The conversation happens after Don Quijote has been wounded in a battle when he tried to be helpful but failed – the usual situation. The battle itself is not represented; which one it is doesn’t matter, since fighting is the routine of the adventures. But the knight is in severe pain. The situation of pain should help mutual understanding, we expect; but it barely does so. Empathy there is, perhaps, and certainly friendship. But affection is not enough for support that goes beyond physical care, which is what Sancho has to offer.
In the conversation there is misunderstanding, manipulation and rhetoric. Is that real or fictitious? But in the end, the figures address the heart of what we are witnessing. First, and again at the end, they talk about merging reality and fiction, which becomes also political manipulation – Don Quijote turns it so that he is right. But Sancho Panza expresses his own wisdom, too. The issue is the difficulty of communication itself, as a social need and problem. This is acutely relevant for today’s diversified world. This contemporaneity of the situation asks for a resounding gesture of anachronism. In the middle of the episode, the figures abandon their roles and become once more ordinary, contemporary friends. Consequently, they enact the difficult line between reality and fiction they had been discussing. Sancho becomes Viviana again and returns to the French that is the language of her current habitat (Paris) and of her friendship with the actor Mathieu. Then, it turns out, something sticks: the past is not just remote, it is also part of who we are. And so is fiction.

After having been wounded, Don Quijote and Sancho argue. The name “Sad countenances” (Caballero de la triste figura) comes up.
First Sancho takes care of him, bandaging his head. 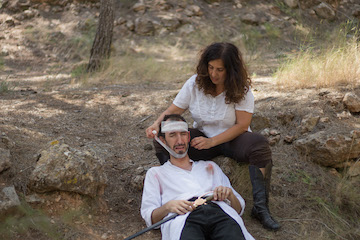 The Don Quijote argues with Sancho, critiquing the use of language his his lower-class squire. 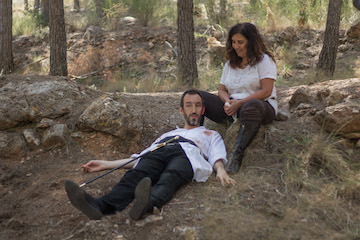 But Sancho talks back, defends animal rights, and comes up with the new nickname. 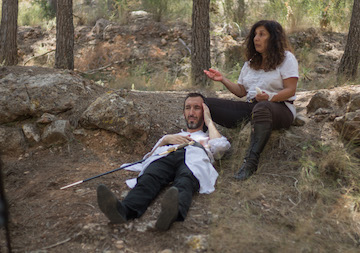