The World Première took place in Kraków, Poland. Why there? This was obvious. The invitation to show the film for the first time in a festival devoted to Film & Philosophy didn’t need any further consideration. This was the ideal context to show the film. The turn-out was amazing: the entire auditorium at the Museum of Contemporary Art (MOCAK) was full, at least 200 people came.

Before the screening the festival director, Marzena Dudziuk introduced the film, and the three of us: lead actors Thomas Germaine and Marja Skaffari and myself. After this the organizer, Roma Sendyka raised a few questions, many querying the mix of documentary (history) and fiction. This gave me the opportunity to explain a bit in general terms how I see this mix. I told the large crowd that the issue was neither history nor fiction, but the audio-visualization of the process of thought itself.

For this, in some cases I needed to supplement, or to make more concrete, the information I had gleaned from the historical documentation and Descartes’ texts, as well as letters written to him. Also, some visualizing metaphors had to come in, such as walking as an embodiment of thinking. This is in fact supported by the philosopher’s reputation as a compulsive walker. Not a flaneur à la Benjamin, but more a stiff, athletic walker who didn’t need a watch that counts your steps. 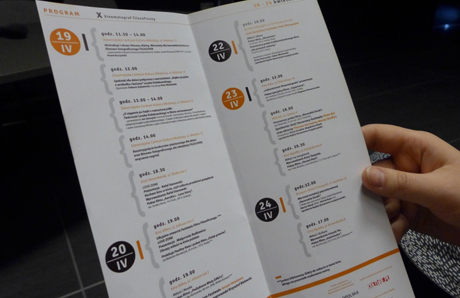