DVD package
25 euro for the DVD box, consisting of two disks and a book, and please add 8 euro for international shipping (outside the Netherlands) The package has been designed especially to be useful for teaching, in addition to aesthetically pleasurable.

To acquire a DVD package, you can make a donation to my current film project, Don Quixote: Sad Countenances. You then send an e-mail to Mieke.G.Bal@gmail.com with the address where you wish the DVD to be sent. Please also include the details of your transfer (bank account no., name and date of transfer) or a screen shot of the bank statement.

Happiness has a price

Emma, 18, is a free spirit. Living on a sprawling French farm, she spends as much time as possible outdoors, far from the oppressive confines of the homestead. What Emma seeks most of all is an escape not just from the farm but to a life of glamour, passion, and freedom of movement. She first spots an outlet in the form of Charles, a widower from a nearby village. But in everyday life he turns out a bit boring.

She soon seeks passion in a lover, then turns her attention to the allure of money and consumerism, spending lavish amounts on extravagant products. It is a habit that will ultimately lead to her destruction as ruinous debt means all her possessions are auctioned off. The lover she is seeing at this moment of crisis will not help her. When Emma’s attempts to recoup money or secure loans from businessmen, former friends and lovers run cold, her needs turn to desperation and she takes her own life.

Adapted from the legendary, prophetic novel from 1856, Madame Bovary by Gustave Flaubert, updated into an ambitious feature film about our own time, Madame B explores the way dominant ideologies from the late nineteenth century – specifically, within the framework of patriarchy, capitalism and its investments in emotions, while love is for sale - are still rampant; today more than ever, perhaps. Capitalism and gender ideology, both luring people with that carrot of the contradictory expectation of permanent excitement, conspire to make individual lives hard, disappointing, and sometimes ruinous. By drawing on classic literature in order to provide an allegory for contemporary mores, the work will offer a radically new interpretation of the text, replete with powerful symbolism that evokes this reimagining. In this way, Madame B questions visually the role of women in a society driven by masculine and capitalist impulses. At the same time, the film explores ways in which cinematic writing can be turned into visual story-telling.

Starring as Emma is Marja Skaffari (Finland). The three men in Emma’s life are played by a single actor, the French Thomas Germaine. This conflation of the three men in one actor expresses the idea that Emma is in love with love, not with anyone in particular. The fact that Emma and her men don’t speak the same language embodies the idea that at any rate, they don’t understand each other. The pharmacist Homais, in our version more criminally nasty than stupid, and obsessively paranoid, is played by French actor Mathieu Montanier. We feel lucky to work again with these three super-gifted actors, who also acted in A Long History of Madness

On the following pages a selection of scene photographs gives an impression of the look of the film; the Cast & Crew page lists the participants.
Scene Photographs
Cast & Crew
See also the multiple screen video installation based on the same work.

Thomas Germaine: one actor, three men, all disappointing and disappointed 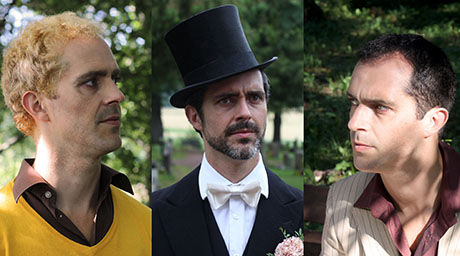 Mathieu Montanier gives depth to the character of Homais, the destructive pharmacist