Saying It
Installation Views
It is challenging to place a total of 13 videos within this home-museum in places where it is meaningful that they must be precisely there, not somewhere else. The beginning of the analysis, when Sissi is brought into the office of her analyst by the head Nurse, is shown on a screen discreetly placed inside a cupboard with glass doors. Next to it are files of earlier exhibitions of contemporary art in the Freud Museum. These files echo the files Sissi grabs, when her analyst is still looking through her own files (of Sissi’s case) and is not yet paying attention to her new patient. Sissi turns to the left, and in the direction where she moves to take the files, the documentation of earlier exhibitions – beginning with that of Sophie Calle – seem to beckon her out of the small screen. Already here, the fictional representation bleeds over into the site where the screen is positioned. This has become the primary principle of our exhibition. On this photo, he entrance hall with on the right the screen hidden among the files. In this first video, Sissi declares that she hears the voices of the grandmothers, and that she was always interested in the kind of lives her doctors lead.The photo below shows her when she says this to her analyst. 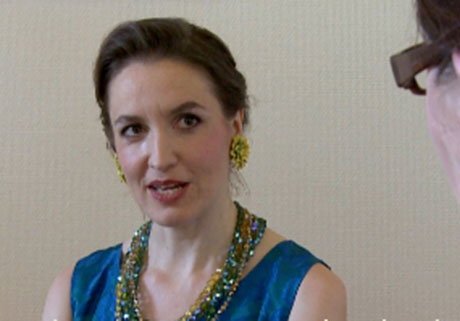 Renate Ferro’s work Screen Memory is installed near a large vitrine with props and dresses, jewelry and photos that show Sissi’s dreams of grandeur. The little house harbours stories of Renate’s childhood. 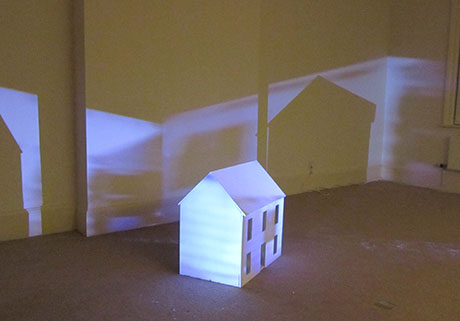 In the back of the house is Freud’s study, where he did his reading and writing. Here, the ideas, brilliant ones and also, wrong-headed ones, emerged, matured, and where written down. The screen on the writing table represents one of the moments that, thanks to the solidarity of the analyst, Sissi is able to begin reaching down into the horror of her past. “the fluid…” she says. For now, that is all. But it is a beginning, laying the groundwork for the later revelation. The image, here, shows the analyst side-by-side with Sissi, together looking out of the window into the world that has so long been inaccessible to the young woman.
Next to the screen, on the same table, lays an Egyptian antique bust. It is well known how Freud, an avid collector, was inspired by artifacts from antiquity. Sissi’s need for a mother figure who would not, like her own mother, fail her, recalls Anna Freud’s insistance on the possibility of horizontal affiliations. With this image, one thinks of Sizanne Steinberg Stewart’s recent book on Anna Freud, Impious Fidelity (Cornell University Press 2011). Like our exhibition, the author asks questions to Freud, almost in the name of his daughter.


On the landing between the two floors of the house we installed two videos which, derived from the Sissi materials, were cut anew to make the dialogue with the site more explicit. The easiest way to characterise the integration of the two sides of the show is to say that Renate develops concepts and we develop the practice. But we all know this distinction never holds. Renate shows the concepts through practice, and we show the practice through concepts, transference being the primary one. Two basic backgrounds are presented to make Sissi’s retrieval of memory possible. DaughterMother foreground the sad fact that Sissi’s mother has not been able to help her when it happened. Yet, Sissi keeps longing for the love of a mother.It is this ongoing craving that, in the end, makes the necessary transference possible. Hence the second work, Transference. Going along with Freud, we see transference as central to make a successful analysis possible. Going against his fatalistic judgment, we gleaned moments of transference from the analysis and thus emerged the video piece “Transference”. Sissi projects her still vital longing for a mother on the analyst; but she also seeks to establish equality, in order to emerge from her abject state. The willingness to recognize and honour that need for equality is the key to the successful treatment. “yes, you have indeed treated me” says the analyst. Here, wee see actress Marja Skaffari (right) and her partner Jerre watching these two videos.


Low to the ground by the fire place, half hidden by imposing armchairs, one of Sissi first moments is represented. She is dressed and coiffed like the child she was never allowed to be. Toy cars around her neck express the double desire of childhood and freedom. In this early session, with a childish voice, Sissi says that her stomach is wounded. When she gets up to leave the room, she adds: “I have given birth”. The shock is ours. The placement near the fireplace suggests the expectation of gifts before Christmas. It is a place for children’s exchange with the outside. But at the same time, with the heavy armchairs, it is a place of paternal authority. In Sissi’s life, this authority became the major element of oppression and hurt. We choose this spot for that ambivalence, wondering how Sissi-the-child was going to be able to arrive at the level of equality necessary for her well-being.


Indeed, right by Freud’s coach, where his classically analysed patients were able to achieve the transference, Sissi succeeds in the same, but under different conditions. “Traumatised patients need a vis-à-vis situation”, said psychoanalyst Françoise Davoine once when I conveyed to her a question by philosopher and art historian Hubert Damisch. Damisch doubted that what we show in the film is really analysis. But Françoise answered: “They have been ignored, not looked in the face, all their lives!” Close to the famous coach, the icon of psychoanalysis, Sissi talks to the analyst who has placed herself next to the patient, on the same sofa. This togetherness makes the break-through possible. From now on, Sissi will emerge from her abjection and begin the long ascent to recovery. This photo expresses best the concept of site-responsivity through which we arranged the exhibition, inspired by the thinking of our curator.


What follows is a gallery of several installation shots. You can click on the top right of each photo to activate the captions and to get to the next one. Enjoy! 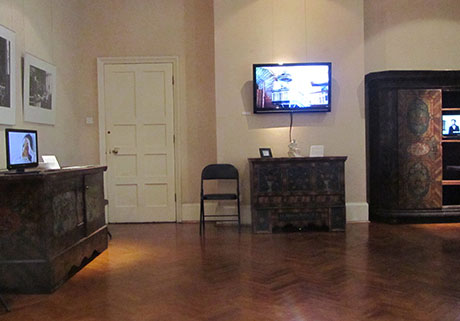 The exhibition is a collaboration with American artist Renate Ferro, who exhibits four installation pieces each devoted to a Freudian concept or idea in its creative connection with personal narratives. How do the two parts of the exhibition hang together then? It seems easy to say that Renate presents the concepts and we the practice. But this is a simplification. Renate’s works elaborate the concepts through personal narratives and found footage. We present the practice through theoretical elaboration, which, remaining implicit in the videos, poses serious questions to Freud. The over-arching concept that rules this exhibition is that of site-responsivity. This idea forged by our curator Joanne Morra, puts a specifying twist on the better-known but also, a bit tired concept of site-specificity. Joanne’s thinking has been tremendously influential in the way we have chosen specific spots for our small monitors on which the fragments of Sissi’s treatment are displayed. Below, three of four screens in Freud’s dining room each got a place to which the video responds. Under the black-and-white photos of Freud and his coach, we put the session where Sissi, in white dress, voluntarily stretches out of the sofa. Half-hidden in a cupboard is the session where Sissi has heard a voice saying that she must wear black; “a crime has been committed.” Here above, right-hand screen in cupboard, beneath a closer view. 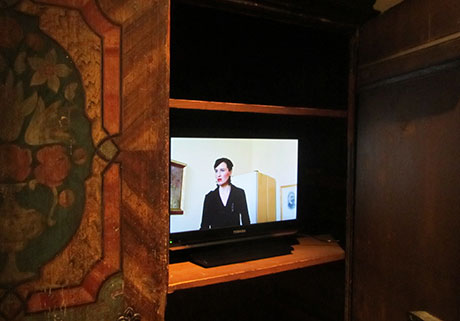 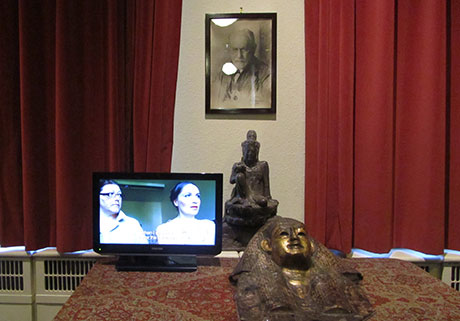 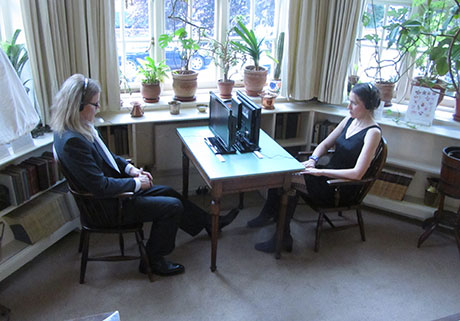 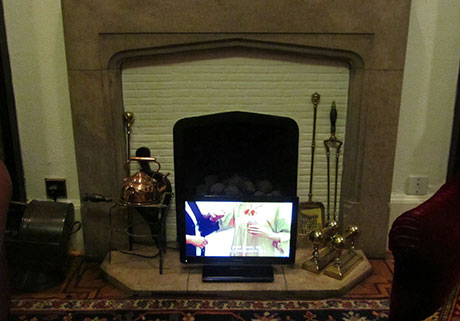 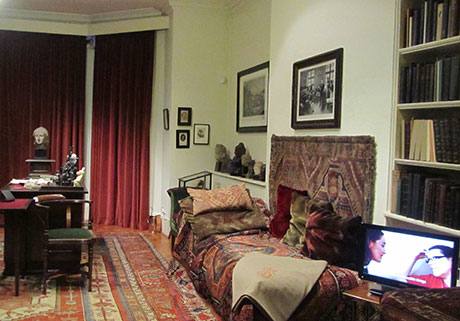