Belatedly, almost two years after the fact we discovered video footage of this exhibition. We edited this into a video tour, which is a new format we have developed for the Madame B project. This is the only video tour we have of an interventionist exhibition. Therefore, it seemed a good opportunity to show how the inserted works function in relation to the routine exhibits in the museum. The video provides a sense of scale - our works are small compared to the furniture of the Freud museum. Also, the contrast between the historic interior of the house and the contemporary look of the videos enlivens the space. Our videos frame the Freud house and vice versa, the Freud Museum also frames our images. Particularly, Freud’s study, with the iconic coach, comes to live, and the dialogue between our approach to psychoanalytic treatment and Freud’s foundational one, is telling.

Exactly one year after the opening of Landscapes of Madness in Turku, on September 20th, 2011, we opened what is provisionally the last and in a sense, culminating exhibition based on the Mère Folle project. On September 20th 2012, we opened the exhibition Saying It. Landscapes was a museum exhibition that covered the entire narrative of A Long History of Madness, supplemented with additional materials. Saying It is narrowed down to the single case of Sissi, starring Marja Skaffari, Marjo Vuorela, and Anniki Järvinen, as respectively, Sissi, her analyst, and her mother. The 13-screen installation carries the title Sissi in Analysis. Supporting cast are Sirpa Joenniemi as Head Nurse, Soile Iivonen as Annmari, Sissi’s roommate and Muse, and Mona Ratalahti as a Clown representing a grotesque counterpoint to Sissi’s desire to find a husband and get married. The exhibition is curated by Joanne Morra, below with her daughter Cara. 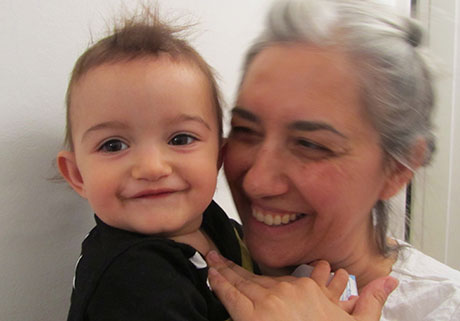 What a thrill, to position the session where Sissi breaks through her incapacitation and manages to say it next to the most famous spot in the entire world of psychoanalysis, Freud’s couch! This iconic spot that has been published so widely, now receives a response by the angry, loving, and humorous Sissi. Supported by the analyst who is willing to stand by her in solidarity and descent into the hell of memory with her, she finally acknowledges the abuse she has suffered at the hands of her father. This abuse had led to an abortion and sterilisation, decided upon by the medical establishment of the time and without her consent. Her mother, unable or unwilling to support her daughter, had looked the other way. As a result of this abuse and neglect, Sissi had indeed become ‘mad’. But did she need to have become psychotic? She seems to ask the question to Freud himself.


The exhibition is a culmination in that it takes place as the Freud Museum in London. In the house where Freud made his home with his daughter Anna, after fleeing from Nazi persecution, we were invited to exhibit the analysis of the so-called ‘schizophrenic’ Sissi cut up in short fragments, representing single sessions each. Freud doubted that such patients, categorized generally as psychotic, could be helped with psychoanalysis. The reason for his doubt was that psychotics were incapable of reaching into their past and hence, of the transference necessary to achieve ‘working through’. Both honouring Freud’s thought and taking issue with this judgment because of its devastating indictment that sentences psychotics to life-long paralysis by drugs and/or hospitalization, we visualize the work of Françoise Davoine to politely contradict Freud in his own home. Here, Michelle and Mieke discuss some final small points while the first visitors are already immersed in viewing the videos.


Installing an exhibition of this kind is an extremely delicate, and therefore, somewhat tense activity. Everything must be placed “site-responsively”. There are technical aspects to this installing, that morph into aesthetic ones, when cables must be hidden and projectors made to work. Our luck was, the members of the Freud Museum’s staff are wonderful. They have supported us all the way. Especially the two technicians Francisco and Daniel were a joy to work with. The basic attitude of “everything is possible” and “we’ll make it happen” never wavered, even when we were nervous. Here you see them busy, a few hours before the opening. They didn’t want their faces photographed, so you get to see their backs… 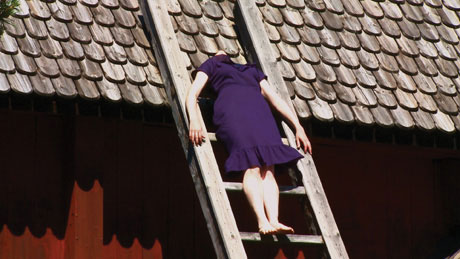 Joanne developed a new concept for this exhibition. Site-Responsivity will also be at the heart of her book-in-progress on the contemporary art exhibitions at the two Freud museums, in Vienna, in his long-term home Berggasse 18, and in London where he spent the little time that was left him, in a museum of sorts of his former life. The melancholy that is inherent in historic museums is here over-determined by the knowledge that he went to London to escape nazi persecution, already a sick man, and had only one year left. All the displays - of his collection of statuettes and other antiquities, of books, of furniture - were already displays of a past irretrievably gone when he first installed himself here. 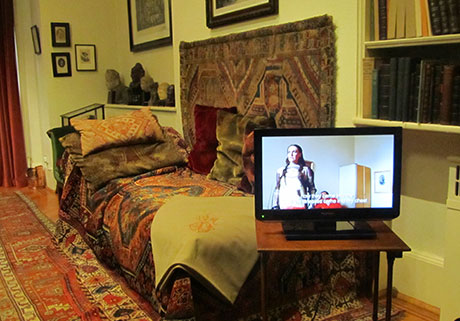 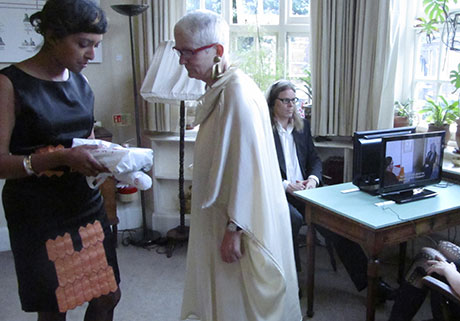 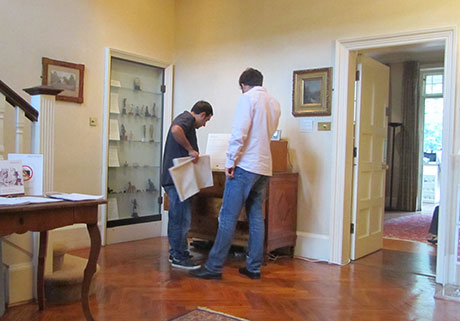