In 2011-12 we exhibited Landscapes of Madness in the Museum Aboa Vetus & Ars Nova in Turku, the ancient capital of Finland. We were so enthusiastic about this museum, that when we had finished Madame B we approached the director again, and her cheerful “yes” decided. The former Rettig palace, originally built in 1928, was restored in the 1990s. They builders discovered leftovers of the medieval city, and the plan to make it a contemporary art museum, had to yield to a dual museum, which functions since 2004. Hence the double name. 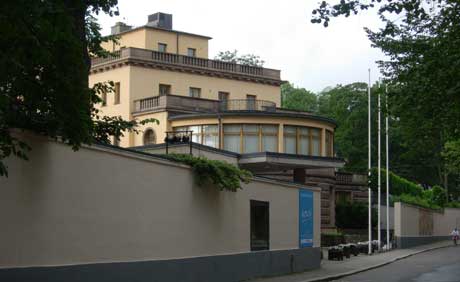 We loved the space, divided in relatively small rooms that establish a semi-circle that suggests an itinerary through the show in a”messy”, non-linear manner; we were very happy to work with the insightful, intelligent, and friendly director, Johanna Lehto-Vahtera, the staff that excels in that combination of professionalism and human warmth that is what makes exhibiting so profoundly satisfying, and about the academics of the nearby university who bring their own interests to bear on the way the public is engaged with the exhibition. This mixture of social, intellectual and artistic intensity already begins on the outside wall of the museum, where the restored old building shows its activities on the wall. For the presentation to the outside world the curator, Silja Lehtonen, has chosen the photograph that best captures what “emotional capitalism” means, including the affective charge of shopping for more self-confidence. For this project, this seemed an ideal museum. 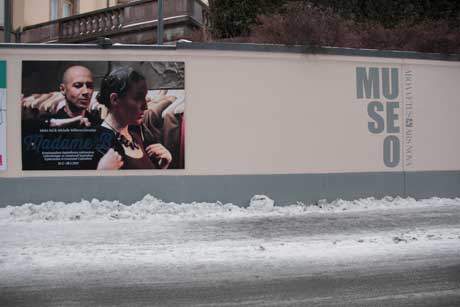 The exhibition begins with a dual-screen installation, Everyday Life, which invites the viewers in to experience the awkward situation of witnessing the first encounter between two people who, both bored with their life of loneliness, tentatively engage on the basis of superficial looking: he voyeuristically, she furtively flirting. The space made it possible to install this piece in such a way that it is hard to avoid walking through it, yet not confining. 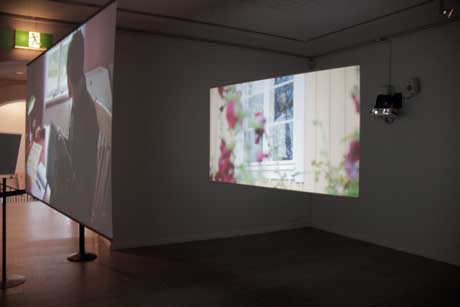 The particularly gripping situation the architecture of this museum creates is that the final room is visible from the beginning. Although visitors are invited to turn left to follow the design of the exhibition, one can glimpse already the sad ending of Emma’s bankruptcy, and, according to our triple imagined endings, divorces and will have to live on welfare; goes mad and is locked up in an institution, or kills herself with arsenic. The five screens of this final installation have been seamlessly installed with great perfectionism and result in an immersive experience of a harrowing no-exit situation. 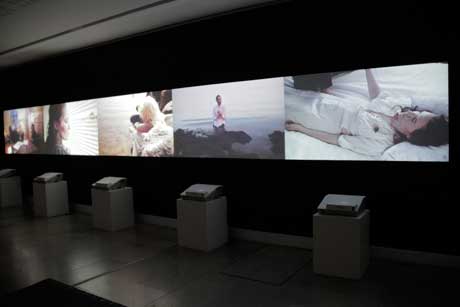 Immediately after the opening, a full-page, raving review appeared in the largest local newspaper, under the emblematic title “Madame Bovary, that’s me”. We saw it by chance during breakfast at the hotel, where businessmen were engrossed in reading it. Written by Mia Hannula, this review, with photo, will attract many visitors. Mia Hannula is a great local art writer, specialised in dance. 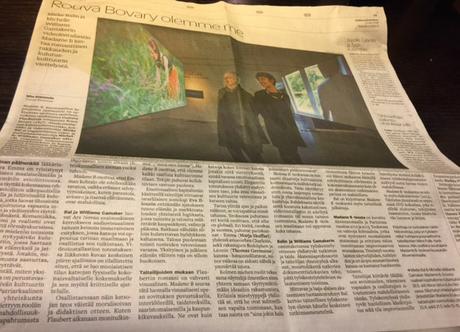 Mia has been following my work, both video and scholarship, for years now. She is herself immersed in writing a PhD dissertation on video art, including on Eija-Liisa Ahtila’s work.

Curated by Silja Lehtonen, the exhibition is truly immersive in our updated sense.

Silja has been brilliantly inventive as well as collaborative, so that we as artists always felt we were on the same wavelength. Her initiative in include a literary program (by Päivi Kosonen, see below) demonstrates her educational passion as integral to the artistic one. 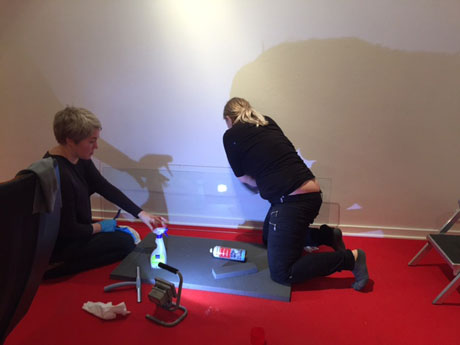 We made our usual short video tour to give you an impression of the way the show was designed. It follows the felicitously varied architecture of the building of which we were given the entire ground floor. In addition to the videos, photographs in various formats and such props as dresses and jewelry are exhibited in vitrines. The room titles and numbers are visible, so that you can follow the development of the show. All text panels use the beautiful font of our brochure and are in three languages: Finnish, Swedish and English.

Below is a photo gallery of pictures made by the museum’s photographer, Jari Nieminen @ Aboa Vetus & Ars Nova. The series follows the order of the rooms and scenes. At the end I include some photos with people, to get a sense of the space.

Doctor Päivi Kosonen, a literary scholar and therapist specializing in French literature, will be leading the discussion based on the video installation and novel. Special attention will be paid to the participants’ own viewing and reading experiences. Reading the novel is not mandatory for taking part in the meetings, though reading it beforehand or between meetings might enrich your viewing experience and discussion.

Thank you, Païvi, for elaborating the complex relationship between literature and film! 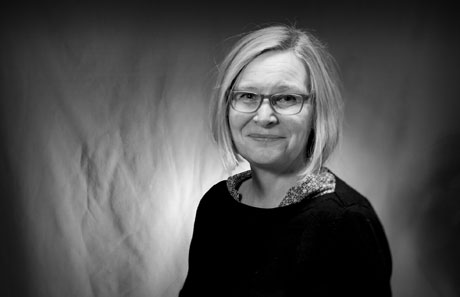 Here is an impression of the first session, written by Päivi:
Sunday’s session went well, ambiance was good, and discussion lively. At least they said so in the end of the meeting when I asked for feedback. No final truth about Madame Bovary was found (:
There were 12 participants in the group, so it was quite a big discussion group. We started acccordingly, slowly, in relaxed intentionality kind of feeling, tried first to go together with the help of image cards I had put on the floor, and then watched your videos for 35 minutes - walking freely, making notes - , after which we were having some coffee, and discussed the inventory task I had given to the participants: to list feelings, ideas, images, sounds, details or settings your Madame B had evoked in their minds. In the end of this first two hours session I gave a writing exercise in which the participants were asked to focus on one detail in you work, descripe it in free writing of 7 minutes and reflect especially the motives for choosing this very detail. This writing was for private purposes but we ended sharing ideas about it. Summa summarum I had an impression that Madame B had had a big effect on participant’s minds, and many of them wanted to see more videos - even before April session, and some said that they would like to read Flaubert’s novel. (Most of them had read it.)
So the first session was an inventory session (instead of adolescence and dreams) and was focussed on your videos, on participant’s first impressions, on themes and subjects and issues of Madame B, and the next sessions. In April I shall “introduce” Flaubert’s Madame Bovary, the novel, besides your work. I am already looking forward to the next session. Let’s see how the group will develop - and in which sense. It is not a developmental group I have used to have, but something else. Anyhow, it is group of lively persons (one male), all super interested in your work and Madame B. And next time there will be 2 persons more.