This exhibition takes place in the historic building we call Posthouse. Here we set the routine of the affair of Emma and Rodolphe, in scene 6A. It was an extraordinary experience to see this video with behind it the actual seascape you also see in the film. This is just one example of coincidences between the films and the setting of the exhibition. The show is unorthodox and very different from most in that each installation has its own gallery room. As you can see from the video and the photographs posted here, this gave the experience an intimacy and a quietness that made the exhibition unique.

The exhibition was also a moment of realisation of how much we owe Mervi Appel and her friends, many of whom appear in the films. Therefore, it was an enormous pleasure to have such participants present at the opening as main actress Marja Skaffari and her husband Jere Lokio, with their daughter Stella; cinematographer Christopher Wessels, responsible for the near-total of the images on view; and Lila Köngäs-Saarikko, who does her mad acts and sings away, causing disturbances, as the equivalent of Flaubert’s blind beggar, in many scenes, from the wedding to Emma’s death; Lena Norman, who plays the social science teacher in scene 2B, and the mother of Astrid Törneroos, our little Berthe who, in view of her mother’s wisdom, did not attend. And many others, including Mervi’s daughter Annina.

The atmosphere on the island of Åland, where the Eckerö Posthouse is located, surrounds the exhibition with its beautiful scenery and summer light. Thus it reiterates what the films attempt to convey: an ageless country-side landscape where Emma could have lived in the nineteenth century as well as today. And while we filmed there two years ago just after mid-summer, now we opened the exhibition right after the first day of summer, celebrated everywhere on the island with fires and barbecue parties.

The video here gives you the by-now customary short tour, enough to make you regret you weren’t there. It is worthwhile comparing it to the video tour of the Łódź exhibition. Both shows were fantastic, yet the contrast is interesting. In Łódź, the entire exhibition was installed in a single large gallery; here, each installation had its own space. The effect is quite distinct for each; to us, it almost seemed two totally different exhibitions. The differences pertain to chronology: in Eckerö, there is a near-inevitable sequence, from room to room. In Łódź, the sound leakages contributed to the memory-scape the sound is designed to create. In Eckerö, there was more of a surprise effect from room to room. It shows the passages from gallery to gallery, and the screens mounted expertly by our friend Jöran Stenius - who played the nasty bailiff in scene 8A. There was one decision that turned out particularly effective: to mount screens against a bright window. This could have been disastrous, if it wasn’t for the extremely high quality of the led-screens used. If you realise that many images were already shot in counter-light - a stylistic specialty of Christopher Wessels - it becomes miraculous that they still are so sharp and clear.

Much of the sound you hear in the video comes from the sound installation that was mounted in the stairwell. Preceding the exhibition, Sara Peinheiro’s fantastic work Emma’s Soundscape set the tone, creating the near-abstract auditive atmosphere where different moments of Emma’s life coexist. This work is one of the means we have used to counter a strict chronological narrative, replacing it with dreamy evocations, memories, and a mixture of sensations that constitute Emma’s life. This was our way of drawing attention to the merging of moments in memories we carry through our lives.

The opening was a very festive affair, both a reunion of old friends and a discovery of new people. Two days prior, the press had flocked in full force, and double-spreads in the local newspapers appeared in time to attract many visitors. Curator Mervi, also director of the cultural centre the Posthouse, had wisely decided to make the opening last three hours, to allow people to quietly watch the films. The staff was both friendly and wonderfully professional. Delicious food and drink appeared as if by magic, followed by a sumptuous dinner, all home made.

On these photographs you see us first - Michelle, Mieke, Mervi - each giving speeches. What follows are views of the eight exhibition spaces. Due to the generously large spaces, there was always enough space even during the busy time of the opening. Kaveh Bahar, a friend of Mervi and Annina Appel, made these photographs; 1-20 are by Kaveh, 20-29 by Annina. They emanate the sunny quietness of the spaces. On the 20th photograph you see, from left to right: cinematographer Christopher Wessels, lead actress Marja Skaffari and, half-hidden, Lena Nordman. They were clearly having fun. 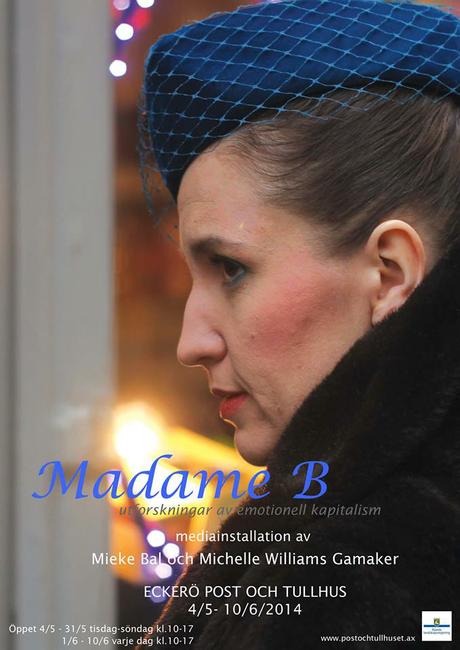 Åland tour of the exhibition Madame B in the Posthouse in Eckerö from Cinema Suitcase on Vimeo.


photos opening and exhibition by Kaveh Bahar and Annina Appel