As period, as style, as sensibility, the Baroque remains elusive, its definition subject to dispute. Perhaps this is so in part because baroque vision resists separation of mind and body, form and matter, line and color, image and discourse. In ‘Quoting Caravaggio,’ Mieke Bal deploys this insight of entanglement as a form of art analysis, exploring its consequences for both contemporary and historical art, as well as for current conceptions of history.

Mieke Bal’s primary object of investigation in ‘Quoting Caravaggio’ is not the great seventeenth-century painter, but rather the issue of temporality in art. In order to retheorize linear notions of influence in cultural production, Bal analyzes the productive relationship between Caravaggio and a number of late·twentieth-century artists who ‘quote’ the baroque master in their own works. These artists include Andres Serrano, Carrie Mae Weems, Ken Aptekar, David Reed, and Ana Mendieta, among others. Each chapter of Quoting Caravaggio shows particular ways in which quotation is vital to the new art but also to the source from which it is derived. Through such dialogue between present and past, Bal argues for a notion of ‘preposterous history’ where works that appear chronologically first operate as an aftereffect caused by the images of subsequent artists.

‘Quoting Caravaggio’ is a rigorous, rewarding work: it is at once a meditation on history as creative, nonlinear process; a study of the work of Caravaggio and the Baroque; and, not least, a brilliant critical exposition of contemporary artistic representation and practice. 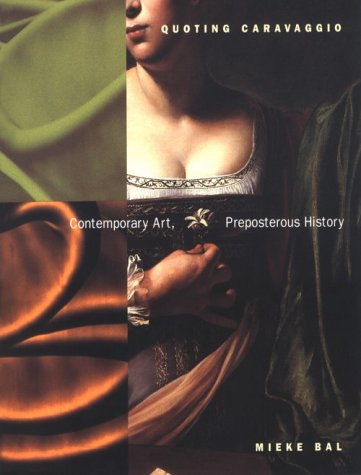