After a great week in Gdansk, Poland, of which you can see the report on the exhibition page Story-Telling in Bits & Pieces, I continued to do just that: collectively telling stories in bits & pieces, of which Miguel de Cervantes was the unequalled master. Without adequate funding I thought I’d never be able to make the dream come true of making a Don Quijote adequate for our time without the usual ridiculing of the old man. But thanks to innumerable volunteers, all friends of friends, we are now already half-way and have a museum exhibition in Sweden vouched for. Hence, this week:

Return to Murcia, where we had such a fantastic adventure in early May around the exhibition opening of Contaminaciones: leer, imaginar, visualizar / Contaminations: reading, imagining, imaging. and shooting the first scene of Don Quijote: Sad Countenances. This time we are going to shoot 5 scenes, around the issue of the difficulty of communication. This part of the project has been selected to fit the profile of the Faculty of Humanities, which sponsored this shooting week. I selected these particular scenes for the reason that it will be installed it in September when we celebrate the 25th anniversary of ASCA. On September 25 the installation will be opened. The next day, colleague and friend Margriet Schavemaker will give her inaugural lecture as professor, and the day after, an ASCA Summit will be held, followed by the inaugural lecture of Esther Peeren, current scientific director of ASCA. All this to contextualize the shoot in Murcia. Photo by Viviana Moin, who plays Sancho Panza. 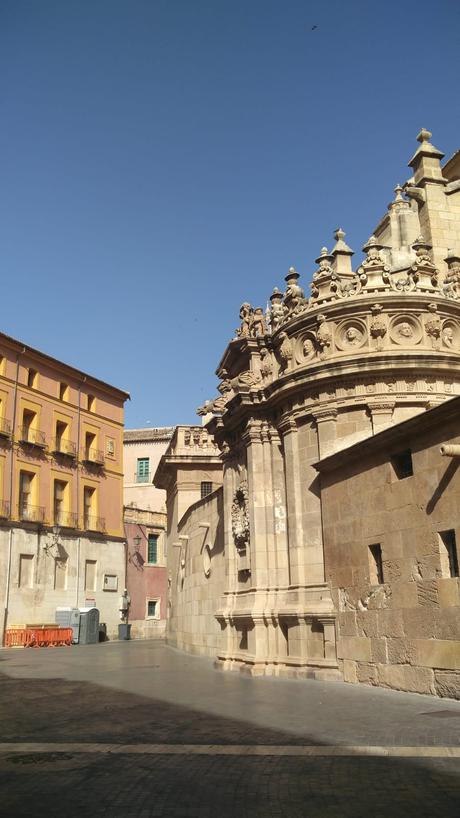 Meanwhile, I went to Gdansk, in Poland, for a huge event, on which I have reported in the section on exhibitions, Story-Telling in Bits & Pieces. The Summer promises to be hot in more senses than one. I aim to briefly report on every day of the shoot, if I have the energy…

The camera operator Jesús Segura is a hero. He devotes his week, his energy, his talent as a great artist, to making DQ happen. Muchísimas gracias, Jesús! Thanks to photographer Mar Saéz I can symbolically show you his self-effacing labor:

Here you see the directing crew, in a photo by José Martín Izquierdo. On the right, Miguel and his friend Isabel Durante, someone I just met in May and who took upon herself to organize the entire week, including recruiting extras:

Thursday morning: I did not have that energy, but here is a short in-between report. The Murcia shoot, now already half-way, is going very well indeed. The complicated scene 10, on the young man Cardenio who has become mad when his best friend married Cardenio’s fiancée, was shot in a mountainous forest. The landscape participates as a character. The actor, Theor Román, did a brilliant madness number.

And my friend Miguel is the best fake priest I ever saw. Today he is going to marry Cardenio’s financé to his rival.

Yesterday June 26 we filmed a scene in a theatre. Don Quijote tries to speak to the public but he cannot manage it without bursting into sobs. Here you see the close collaboration between actor and director. 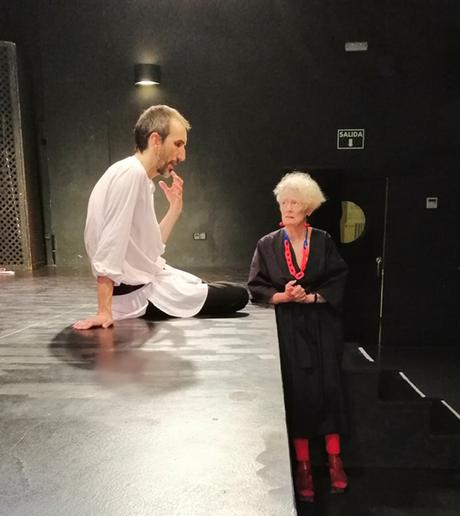 But one of the best decision has been to assign the role of Sancho Pança to Mathieu’s friend Viviana Moin, an Argentine performance artist. They make a great duo, as this photo by artist Mar Saéz clearly shows.

For me, he project is to connect cultural heritage, that is, Cervantes and his traumatizing experience of five years of slavery, his novel consisting of bits&pieces, with today’s world in shambles. No ridiculing of an old man and a working-class servant, as all DQ films without exception do; no artificial unity where none is appropriate; no linearity with its evolutionist arrogance.
And to think intensively about what we can do with art and thought for today’s world, which is as much in shambles as it was in Cervantes’s time. And laughter can nourish this, on the condition that it is not at the expense of, but with others, in the joy of learning.

Mar Saez has captured this nuance with subtlety.

Friday morning, from 9 to 1, under 40 degrees. The final day, with the complex scene of Marcela, which I have retitled “Woman as Anti-Suicide Bomb”. A group of five mornings are crying over the dead body of their friend Grisóstomo, who killed himself after being rejected by the beautiful shepherdess Marcela. The five students did a great job crying, howling, and then accusing Marcela, who wanders by, of having killed him.

After pronouncing her firm “no es no”, Don Quijote comes racing in to defend her. After threatening the men with the sword (the camera-genic one that was given to me in Helsinki!) Marcela pushes him away and says it again, this time to the camera (meaning: to all viewers): no es no. Dr Irene Vilaescusa, one of the PhDs from ASCA I like to boast about, played a beautiful Cervantine feminist heroine.

The blue raincoat which served to make a bit of shadow won’t be visible in the video. These two photos were made again by artist Mar Saez.