Last week, May 22-24, I had an experience unequalled by anything before. At moments, it felt like carnival, at others, like historical costume drama. But more profoundly, it felt like a (re-)encounter with commitments and values. During the boat ride, like tourism, and during the final Ball, I was just amazed that so many people had invested so much time and energy in organizing an awesome event: historic dances, for which they had rehearsed months and months. I had a dance with the Dean: 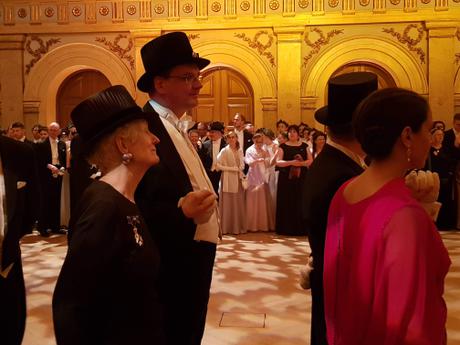 Honor:
What happened? I was awarded an honorary doctorate at the University of Helsinki. It turned out I had been nominated by professor Kirsi Saarikangas, historian of modern architecture, by chance I bumped into her last September in Torino, when she said to expect a letter from her university. I have had such honors before - in Bergen, Norway, in 1996, and in Luzern, in 2016. The award events are always both moving and fun. But what made this event so impressive was the serious engagement with a historical tradition. Look here for an impression, with Kirsi: 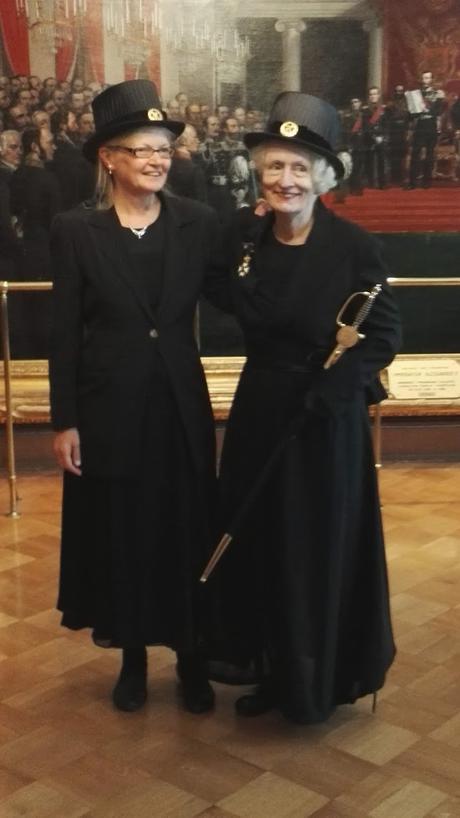 History:
The elaborate ceremony was first done in 1643, five years after Queen Kristina (the 12) founded the university. During the dinner after the conferment ceremony, I was asked to give a speech, in response to a speech to the honorary doctors by a “young doctor”, one of some 150, who had been “conferred” in the same ceremony, dr. Lammi. Here are some quotes from my speech.
“I am speaking in the name of the nine honorary doctors who have today received your ceremonial hat and sword and much more: three days of celebrations, according to a tradition that goes back to the age of my favorite painters; hence, evidence of French historian Fernand Braudel’s statement that ‘yesterday is today’. This photo that seems as if I am play-acting in a historical costume drama was made by Bona Fide Creatives:

And before all, an honor from an institution that thereby demonstrates that its staff care for the combination of the advance of knowledge and insight, culture, and education.Dr Lammi is a good instance of the integration of these domains, as a scholar specialized in education. She defined this field as a breeding ground of encounters. She could not have chosen a more adequate word. This implies a horizontal, dialogic, communicative social interaction, rather than a hierarchical, authoritative monologic by those who know addressed to the ignorant. Her view of education matches precisely my own, my conviction that learning is only possible on such a basis. But that goes both ways. My slogan in this context is: ‘if you don’t learn from your students, you are a bad teacher.’ This is the most important road to integration of social and academic, and also artistic performance and progress.” 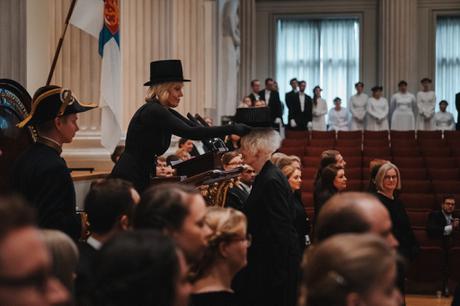 (photo by Bona Fide Creatives)
On the history of my connection to Finland, which underlies the honor bestowed on me, I said this:
“My first invitation to Finland was academic, in August 1996, when I participated in the Nordic Research School Gender, Art and Modernity. At that occasion I met professor Kirsi Saarikangas, and a number of other “Nordic” art historians. Kirsi’s work on the aesthetic of social space fascinated me especially. It concerned art and living space; “architexture” as a special art form that aims to make the living space of actual people, more comfortable as well as, or because, more beautiful. But differently from many others who study the history of architecture, for her it was really, first and foremost, the “living space” that mattered, as the primary frame of artistic beauty. […] It didn’t take me long to associate this interest of Professor Saarikangas with the great Finnish tradition of architecture and design, of which Alvar Aälto is perhaps the most famous. But the interest of this group of Helsinki art historians extended, inflected, or specified, the combination of the aesthetic of space with gender. I dressed, perhaps provocatively, for the evening-before when “evening dress” was required. Photo also by Bona Fide Creatives: 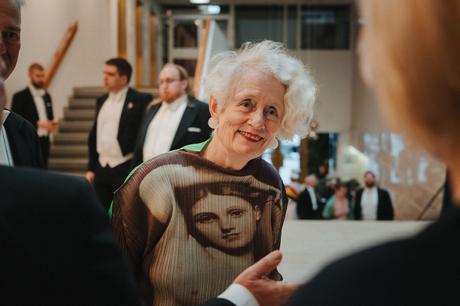 Since in the older traditions, it was women who spent most of their time in the home, it made total sense, for cultural historians, to analyze the connections - obvious, but sometimes too obvious to study them in detail - between gender, space, and art. This combination lies at the heart of a new kind of social art history that exceeds the usual obsession with 19th century French painting. After that I have visited several times in Helsinki and the University of Helsinki, and although we were both too busy to stay in regular contact, I never quite lost touch with Kirsi. In 2008 I came as a guest of her research project “Representing and sensing gender, landscape and nature”. The title alone speaks volumes about her commitment to the integration mentioned above. The Academy of Fine Arts, the National Gallery Ateneum and the Finnish Women’s Studies Research School came together. She was director of the Christina Institute for Gender Studies, named after the founder of this university. Queen Christina became later one of the two main characters of my “theoretical fiction” film, Reasonable Doubt, on Christina and the philosopher René Descartes, a film of which Kirsi organized a screening last Wednesday.
Beyond academics alone, I have interacted with and learned from artists, such as Jussi Niva and others. Among my main connections to Finland is the internationally renowned artist Eija-Liisa Ahtila, to the brilliant work of whom I have devoted a book-length study, Thinking in Film. She is a pioneer in broaching socially relevant topics that became hot afterwards, such as immigration, refugees, nature, environmental issues and gender. The current exhibition at Kiasma focuses on all these. Ahtila counts among the intelligent and politically aware artists I have studied who have stimulated me in my own attempts to integrate artmaking and academic reflection.
And this brings me to my third engagement with this beautiful country. Immersing myself in its nature, culture, and the hospitality and friendliness of people, I have set films in Finland, mainly on Åland, in Turku and in Tampere.

From 2007 to 2011 I worked with Finnish actress Marja Skaffari, performance artist Helinä Hukkataival, and curator Mervi Appel and many others, such as doctoral candidate Mia Hannula, for the making of a cinematic exploration into the possibility of helping psychotic patients without drugs and institutionalization, and again, from 2011 to 2013, with the same people, Madame B, both also exhibited as video installations on Åland and in Turku. I mention these events because they were the product of genuine encounters, in which luck, commitment, intelligence play together to make something happen.”

Happiness:
My loyal partner Ernst was with me all the time, and very helpful to deal with the stress of the elaborate dress codes, to which he himself also had to conform. He kept the fun alive even when I was tired or nervous.

Among many pleasurable and fun moments, such as the boat trip where we were welcomed with a delicious mimosa, most important to me was the re-encounter with Kirsi and her husband Tuomas, who took care of us every minute of the three days. They are now close personal friends as well as great intellectual interlocutors. 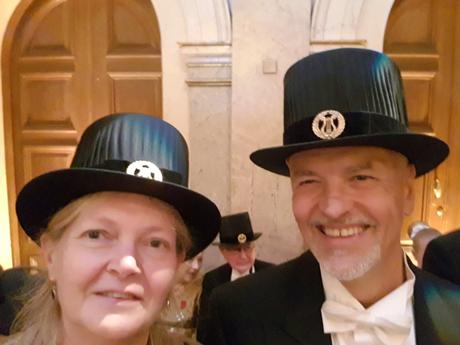 And meeting many wonderful people for the first time, such as, most exciting, Tuula Arkio, founder and long-time director of the fantastic museum of contemporary art Kiasma. I had an immediate bond with her over contemporary art and many more topics. She had come to see my film and was very enthusiastic about it; another great honor. 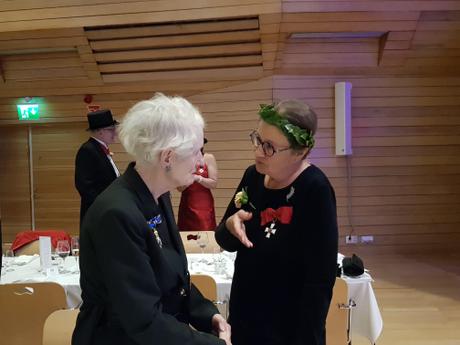 All in all, it was a unique, unforgettable event, to be immersed in a true intellectual community where friendship was as exciting as the academic, artistic and pedagogical sociality.
Here is a short video of the ceremony.