Seminar “activating Artifacts”, organised by De Appel and the University of Amsterdam

Barely returned from Oslo, with much delay, the next day, Monday March 27 I participated in a seminar organized by De Appel and its director Niels van Tomme, in collaboration with the University of Amsterdam. It was an invigorating event, which demonstrated common concerns about art in the contemporary world. To get a sense of the event, here is a brief video of my conversation with Niels after the event: Activating.

On March 23 to 25 a conference took place to give more depth to the exhibition Emma & Edvard. Some of the greatest scholars in topics that radiate from the phrase of the title, “Modern Sensibilities”, came together. They delivered fabulous, brilliant papers. I felt greatly honoured that they all accepted my invitation and were able and willing to really address the topic. As a result, as opposed to the usual one-topic conference where speakers bring their own obsessions, so that no collective concentration of thought emerges, here the very diverging topics came together in a common search for how to understand the sensibilities that underlie modern art. You can read the programme, abstracts of the lectures, and bioblurbs of the speakers here: programme.pdf
The photo shows the speakers in a relaxed after-conference moment. Left: Jon-Ove Steihaug, director if collections and exhibitions of the Munch museum, Griselda Pollock, Ernst van Alphen, Rachel Burke; right: Jonathan Culler, Kristin Gjesdal, Mieke Bal, Patricia Berman, Øystein Sjåstad. 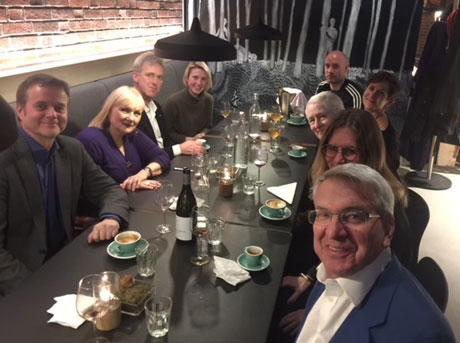 Unfortunately, Miguel Á. Hernández Navarro could not make it, but he will participate in the publication. The papers will be published in )Text Matters_, an international journal for cultural studies and literature based at the University of Lodz, Poland, edited by Dorota Filipczak. They will already appear in Fall 2017.

March 17 was a memorable day, to say the least. ASCA had organised a “Tribute to Mieke Bal” titled In Medias Res, alluding to the book of the same title I published last year on the brilliant shadow plays of Nalini Malani. See In Medias Res. The integration between that event and the opening of an exhibition of works by Nalani at the Stedelijk Museum expressed concretely the value of collaboration so dear to both Nalini and myself. At the end of a series of eight lovely speeches, each addressing a different field in which I work, the vice-mayor of Amsterdam took the microphone to appoint me “Ridder in the Orde van de Nederlandse Leeuw” (Knight in the Order of the Netherlands Lion). This took me completely by surprise. And so, this photo by Erik de Jager suggests, did it to the audience: 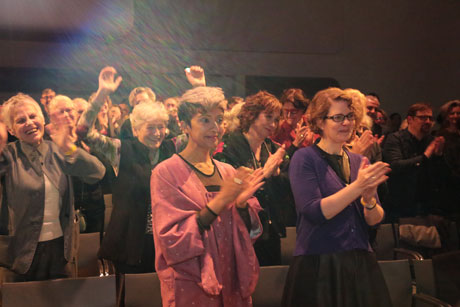 the public responding
Here I am standing, moved and proud, next to the vice-mayor of my beloved city, Simone Kukenheim, after she pinned the decoration on my jacket. 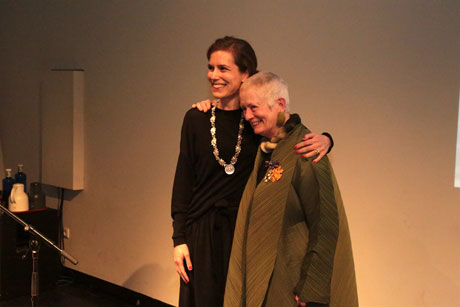 a state portrait
As you can see from the photo below, the “ribbon” (lintje) is not the most aesthetic piece of jewelry I have, but it has meaning: it comes in the name of the people of Amsterdam, for having left the ivory tower with my work. 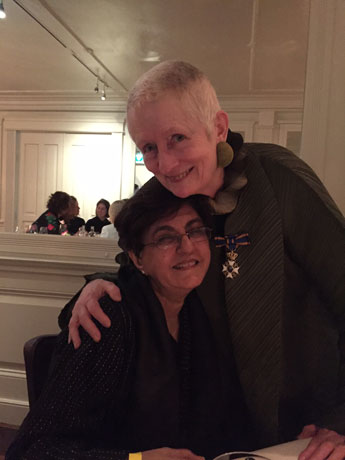 with the artist Nalini Malani, who has become a great friend. photo: Johan Pijnappel
I also participated in a video posted at the entrance of the Stedelijk museum during the tenure of the exhibition Transgressions. You can see the video here and learn about Nalini’s work from herself, the curator Margriet Schavemaker, and a small bit from me. The entrance hall with its cozy video corner looks like this: 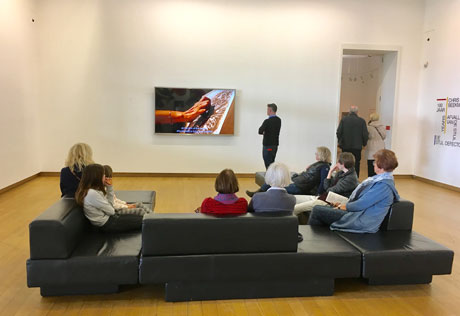 The webpage of the University of Amsterdam posted the news of my knighthood immediately. See here for the university’s text about the distinction.
Below are some photos, by Erik de Jager. The first series shows the speakers in order of appearance, with only Griselda Pollock missing.

The photos after these eight show the event, from before to after-effects, including some tears.

Sunday morning, finally, Anna-Helena Klumpen, who had come from Berlin to be present at all these events, came to my house for an interview. See Anna-Helena_Klumpen. Anna is a specialist of my film work. She is writing her PhD dissertation about thinking in film, and before that she wrote her MA thesis on A Long History of Madness.

Today I am off to Norway, for some lectures, a meeting to plan the new display of Munch’s work when the Museum moves to the new building, in 2019, and, above all, a conference at the Munch Museum, “Modern Sensibilities”, on Thursday and Friday, to probe some more of the issues the exhibition Emma & Edvard: Love in the Time of Loneliness has brought up.

I am very please to invite you all for the opening, on March 18 at 5 pm, or for a later visit, to the first exhibition of Reasonable Doubt in the Netherlands. The Centre is open from Tuesday to Friday from 10 to 6 pm.
It so happens that as of the opening of this exhibition in the Intellectual and Cultural Centre Castrum Peregrini, Herengracht 401, Amsterdam on Saturday March 18, three exhibitions of my video work are running simultaneously. 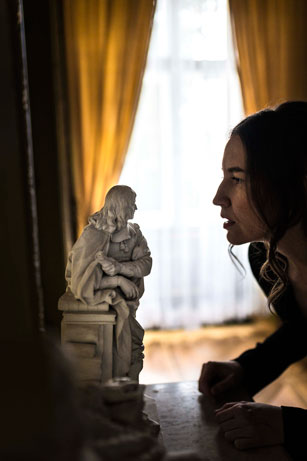 This photograph was made by Przemo Wojciechowski in Nieborów Palace in Poland. It shows Queen Kristina (played by Marja Skaffari), frustrated by the delayed arrival of René Descartes, an impatience her clutched fists in this confrontation with the small statue of the famous philosopher signifies. For more on the exhibition, see Reasonable Doubt.

Madame B in Turku

On March 9th, the exhibition of Madame B, the full 19-screen presentation opened in Museum Aboa Ventus & Ars Nova, Turku, Finland to our delight. So, at this point in time, two very different full presentation of this work are running simultaneously - in Oslo and in Turku. After Oslo, I thought nothing could be so fantastic as Emma & Edvard. But to my great surprise, the difference is so enormous that no comparison is possible anyway. The only thing the two shows have in common is those video works. But also, both buildings have a structure that lends itself for a more or less narrative presentation without imposing linearity, let alone chronology.

In terms of content, the emphasis is slightly different. In Oslo, on the loneliness; in Turku, on the issue of emotional capitalism. The curator had chosen the photo of emotional capitalism “in practice” for the outside wall. This sets the tone already for casual passers-by. A literature professor from the University will hold a reading seminar of Madame Bovary after _Madame B. 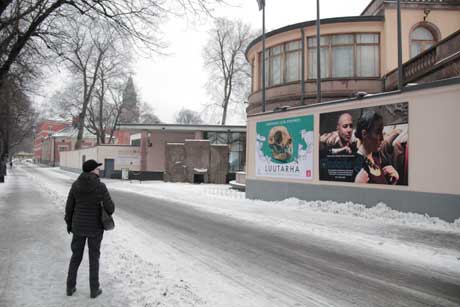