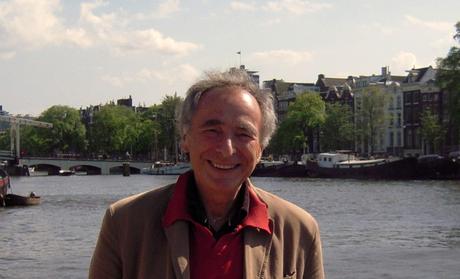 In memoriam John (Janos) Neubauer
On Monday October 5th, 2015, my long-time friend and colleague John Neubauer passed away, in the presence of his beloved wife, the artist Ursula Neubauer, and his daughters Eva and Nicole. He was 81 years old. From 1983 to 2003 he was professor of Comparative Literature at the University of Amsterdam. Before that he had taught at Princeton and Pittsburgh, and had been a guest professor at Harvard, and in Colombia, Canada and Germany, and a guest researcher in his native Hungary. Many around the world have had the opportunity to benefit from his enormous knowledge of what is now called “world Literature”; and enjoy his great intelligence, coomitment, and humor.
John was a true world citizen. Born in Hungary, he has lived for a long time in the USA, and ended up in the Netherlands. He felt European, and was averse of all forms of nationalism.
He earned a BA (cum laude) in physics, spoke a large number of languages, and had a deep interest in music. His first book considered the history of the relationship between music and language, including literature - The Emancipation of Music from Language - and until the end he has worked hard to finish what had to be his last book, The Persistence of Voice, symmetrically with the first one studying the impossibility of separating music from language in an absolute way. With some devoted friends, we hope to bring that book out posthumously, as soon as possible. In this way his scholarly work is framed from both sides of his career by his greatest intellectual passions: history and music, across cultural borders. In-between he wrote innumerable books and articles, on literature, cultural history, and topics such as adolescence. He was a great scholar of the Humanities, in the widest sense.
John was not only an internationally important scholar but in the first place a thoughtful, loving husband, father and grandfather; a warm friend who enjoyed life, wanting others to be able to do so as well. Until the very end he made people laugh with his refined humor. In these relationships he was keenly self-critical. He could tell endlessly about what he had read, heard and seen, always balancing his story-telling with sincere interest in the experiences of his interlocutors. Students and PhD candidates have been able to learn a lot from that thoughtful attitude. Shortly after the sudden death of our colleague and friend Jan van Luxemburg he started an organization, in memory of Jan, for the promotion of reading. This program will be continued under the leadership of three colleagues to whom John had entrusted this task.
John was extraordinarily athletic; an exceptional sportsman. Until a few months ago he made long walks in the mountains, and is known for being an enduring marathon runner. He was 80 when he ran his last marathon. Athletic as few intellectuals are, it is extremely ironic and harsh that he had to die of a cruel degenerative disease of the muscles. His death is a deep loss for all his many friends and colleagues, readers and students. I can only hope that his wife Ursula will be helped to cope with this great loss by the thoughts of many, and continue her life and artistic projects, in which John has always encouraged and stimulated her. Ursula, Eva and Nicole have a lot to be proud of. I hope they can get some comfort from that.