On February 19, the National Gallery opened a new department of moving images. This department will have a three-monthly, changing display. The installments are called chapters. The first one, titled “The Importance of Being a (Moving) Image” assembled works by seven experimental video artists. Michelle and I had been invited to make a reduced version of Madame B, appropriate for a group show. We made a 5-channel installation we titled “Precarity”. We are, of course, very proud to be included in this project at such a prestigious venue. The installation ended up on a floor of its own, and this allowed for an elegant placement that does justice to the fantastic architecture of the Palace. The downside: there was no possibility to capture the installation as a whole in a photograph. This image, made by co-curator Jen Kratochvil, who made the display with Adam Budak, is as good as it gets. 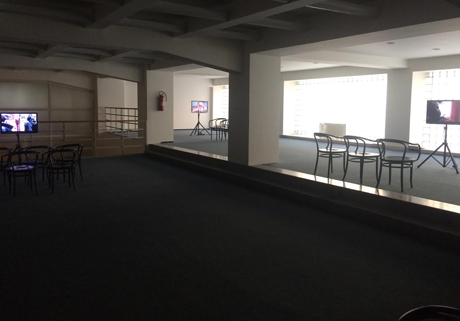 Images of individual screens are easier to make. On the following photograph, little Deyna Mehdi is confronted with the anxiety of Emma regarding gender, expressed, luckily, in a language the child doesn’t understand, and answers with a lovely smile. This moment has always been one of my favorites in the project. 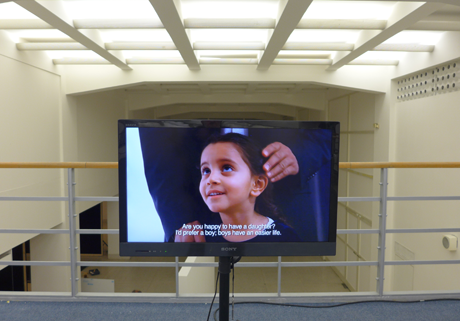 Two rather dramatic things happened around this opening. Two days before leaving for Prague I wanted to go to my office to take the hard drive with the files on it, just in case something went wrong. But the building had been occupied by (justifiedly) angry students. So, it was impossible to get in. I made my failed attempt just when the press arrived in full force, so I had my day of fame. Instead of climbing in, I requested and got the students to get the disk for me. All in all, it was a hilarious moment. So hilarious, I want to share it with you, in spite of my inelegant pose. 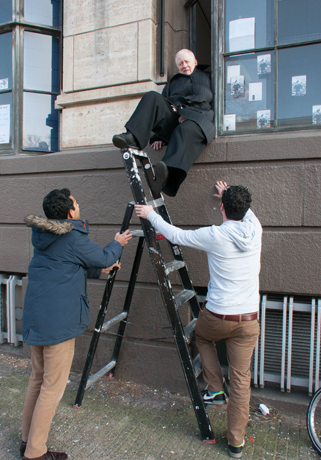 The second incident was less fun. I had a terrible fall on my way to the opening, and bled terribly. My dress ruined, my face like that of Frankenstein’s monster, and the festive evening was a bit ambivalent. Still it was glorious. The Palace had never before attracted so many people. Adam Budak really has made the place change dramatically in the little time he has now worked there. Th next day, still looking seriously weird, I gace the longest lecture of my life.
The lecture can be watched (and this does include my war wounds) on this link:

I will soon describe the show further on the group exhibitions page.