In January I went to Mexico City for two things. One was a conference with the title Las tres eras de la imagen, in homage to my regretted friend José Luis Brea, who passed away in 2010. His last book bore that title. It was also a reunion with some friends who were also very fond of José Luis. The bitter-sweet commemorative atmosphere was countered by the enthusiastic reception of the conference. The audience of some 700 people don’t fit into the frame of this picture. 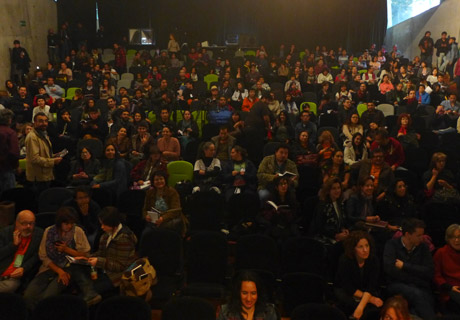 The second activity was a 3-days retrospective of a selection of my films in the lovely cinema Tonalá, a favorite of art lovers and intellectuals. It was wonderful to discuss, even in my faltering Spanish, the older and newer films. While films were screened in the theatre itself, every day there was one film looped on a monitor outside, in the open-air foyer. I liked the coincidence with the film whose title read “the worst woman of the world”. 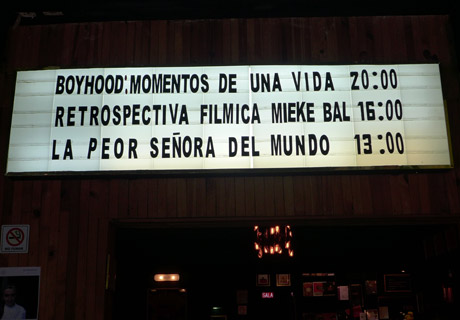 The organizers from the Centro de la Imagen had produced a beautiful catalogue with a brilliant essay by Miguel Á. Hernández Navarro. The first day Madame B was screened, followed by a fantastic commentary by Miguel, who then proceeded to raise questions, before giving the floor to the audience. The second day, when A Long History of Madness was presented, Alberto Montoya Hernández did the same.
The Mexican colleagues are so full of energy that I never manage to go there without an entirely full program, so that I go home exhausted, a bit like this deity drowning in stone, but with great satisfaction. 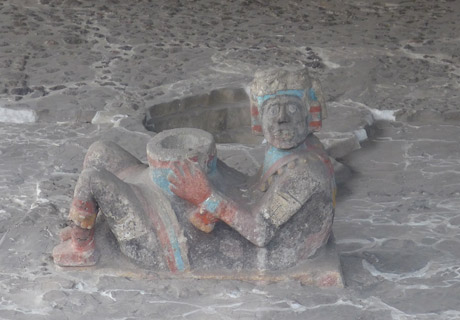 This time, there was another unexpected sequel plotted: Humberto Chavez Mayol is working towards yet another visit, with an exhibition of Madame B in the same wonderful space as where, barely three years ago, we had Cosas imposibles. Check out the video tour of that show, to get a sense of the fantastic space in an old factory building. That, too, was due to Humberto, and linked to a conference on semiotics and visual art, as this one will be. This next visit will be in May - barely three months from now! Not that I don’t have enough to do without it - but how can I decline such an opportunity?
Meanwhile, in some 10 days I will be on my way to Prague, for a smaller-size installation of Madame B in a group program in the National Gallery.