Rather unexpectedly, I received an invitation to come to India to see the last of three “chapters” of a year-long exhibition in Delhi, view of a book project. Artist Nalini Malani had been on my radar ever since I saw her Remembering Mad Meg shadow play in the Centre Pompidou in Paris. So, it didn’t take a second to decide, and off I went. 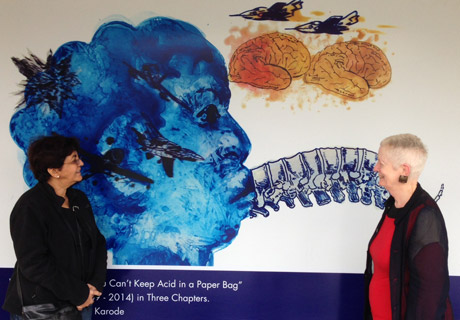 The show was mesmerizing. The shadow play Transgressions occupied most of the three hours we had for the visit. 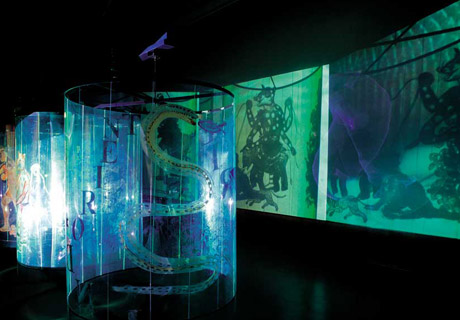 But there were several other elements I was completely taken by. One is a new painting in eleven large panels, painted in the reversed painting technique Malani uses often. For an image of this work, Twice Upon A Time, see on the Book Projects page, 2d column, bottom half. I am also deeply impressed by the way this artist mobilizes specific media, often in versions of her own invention, to make political points, express solidarity, and multiplies the work’s impact. She conceived a performance in which a museum guard, who had been protecting it for months, erases a wall drawing of Medea. This drawing as well as its erasure was an act of solidarity with fresco artists in Rajastan whose work is crumbling due to neglect. 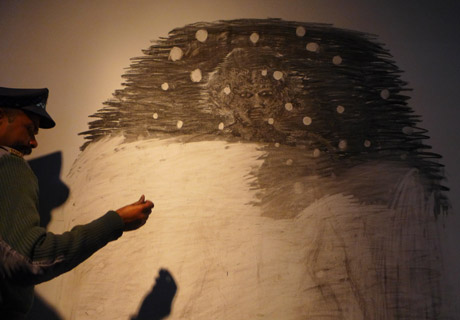 My week in Mumbai was filled with an intensive and inspiring encounter with Malani’s work.