A few days after returning from Poland I went to Copenhagen and Umeå - the latter city in the North of Sweden. In Copenhagen the Network on Migration and Culture had organized a conference titled “Crossroads: Europe, Migration and Culture”. I had been invited to give a keynote lecture, and when I proposed to also exhibit my installation Nothing is Missing the organisors immediately and enthusiastically agreed. They found three students who are curating projects under the inspiring, enigmatic name “Macho Llorando. Here they are: Tobias, Karen and Elin. 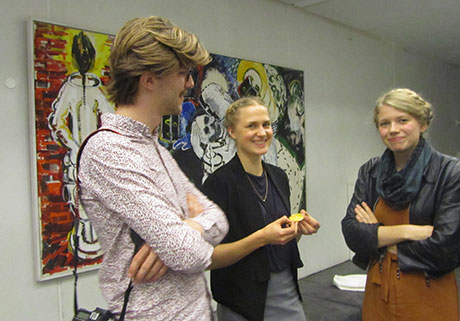 As you will soon see on the relevant page, they did a brilliant job. The most touching detail was a pair of worn shoes under a chair. A silent sign of absence. Thank you so very much!
Another big thank-you goes to Frauke Wiegand. Frauke accompanied me from the first to the last moment, including on bike rides through the city - with Amsterdam, Copenhagen is biking paradise - and organised everything in such detail that any question I had was already answered before I posed it. Here she is, herself a dedicated PhD student working on memory. She also participated in the “masterclass” I was asked to give the day before. 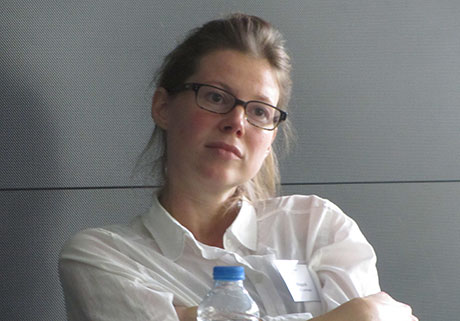 Right after these activities I went on to Umeå. The attraction was a video installation exhibition, “Fields of Theatricality”. They wanted me to give a lecture at a conference. This turned out a half-day event, with two lectures, one by performance artist Joan Jonas, whose installation Lines in the Sand was not only brilliant but totally enchanting. Unfortunately, I missed the live performance of this piece she did the evening when I arrived, exhausted. In this work, Jonas revises the mythical story of Helen, allegedly the (sexual) cause of the Trojan war. In line with H.D.(Hilda Doolittle) in her epic poem, the Trojan war was a trade war and Helen wasn’t even there; she was in Egypt. Jonas reads lines from Doolittle’s text while writing with chalk on blackboard,walking through projections with palempsestic layers of shadows and other signs in the desert sand. H.D. had been in analysis with Freud. This, and many other elements, spoke directly to my own interests. 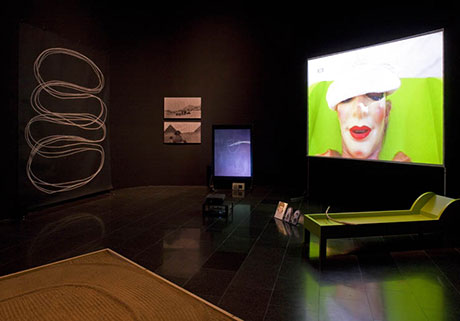 I can wholeheartedly recommend the format of this event: between single lecture and a full, often overloaded conference program, just a half day, two speakers, an exhibition, lots to see and to talk about.

In the middle of the busiest semester ever, a trip to Poland was a highlight. The event had been initiated and organised by a Polish scholar, Katarzyna (Kasia) Bojarska. Here she is: top-smart and lovely: 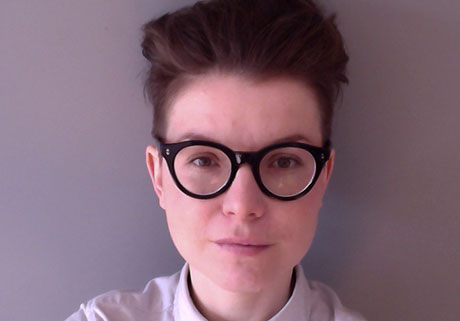 First we (Ernst van Alphen and I) went to Warsaw, where we each gave seminars and lectures. I did a session in a series of seminars on affect, devoted to the writing of Flaubert and why it lends itself so well to our project Madame B., which we are about to launch.
The next evening, for a full house, there was a panel discussion about my book Travelling Concepts which has just appeared in Polish. It came out at the same time as the translation of Narratology, so, at some point this year it felt like “my Polish year”. See the earlier blog My Polish Year. I warn you: my Polish year is not over!
The initiator and organisor of our tour, Katarzyna (Kasia) Bojarska, had found a number of great experts, including the translator, willing to participate. It was a very lively discussion. Her friends Magda and Łukasz rapidly became our friends too, and moreover, they helped us with every practical detail imaginable. Here you see them in the Wednesday panel discussion. Both evenings I was deeply impressed by the intellectual vibrancy of the people; a true intellectual community. 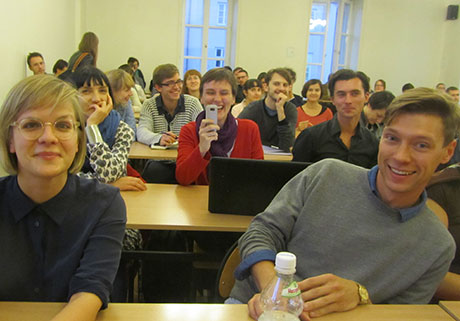 The day after this we went to Łódz. Ernst gave a lecture there on his current book project, on the archive as artistic medium. For me, this was a fantastic opportunity. Michelle and I will exhibit for the first time the installations of our complete Madame B. installation project, consisting of 8 installation, together of 19 screens. Jaroslaw Suchan, director of the Sztuki Art Museum had invited us to exhibit there, and the opening is as soon as December 6th! The Sztuki (the word means “art”) is situated in an old palace that had belonged to an industrialist who had made the city great. Here is just a corner of the building. 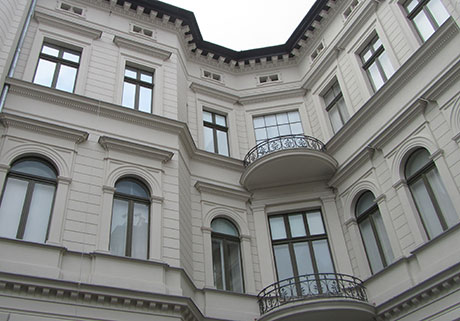 It was a wonderful experience to go through all the details in the site itself, with the curators Katarzyna (Kasia) Sloboda and Przemysław (Przemek) Purtak, very creative, committed and friendly people. They made us feel we are all on the same side in our endeavor to present this work that is a bit challenging for the space. You can see the good cheer on this photo: 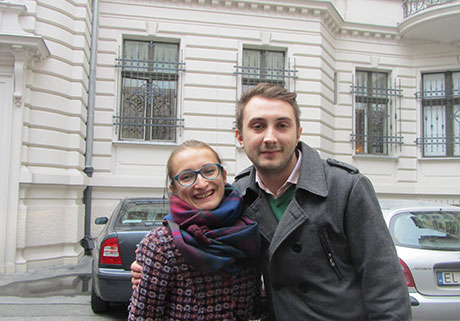 The last day Ernst gave a seminar on his archive project, which was extremely well received, we visited the museum of Polish Jews, a spectacular new building, and I was asked to give a lecture with video clips about our project, in the Museum of Modern Art in Warsaw. Again, a full house, a lively and intelligent discussion and a very satisfying end to the tour. One day was left for private museum visits. We enjoyed the National museum where Old Master art changed us from the contemporary art the week had been filled with. All in all, I have a strong sense of belonging with these new friends and colleagues. A wonderful week.