It’s been too long since my last post. Busy as usual, plus, a short vacation. But then, the news is good. Two new books came out, simultaneously. This has not happened to me before and won’t happen again, I promise. It just happened, and thanks to Liza Thompson at Bloomsbury, this big adventure ended so well I am very excited about it. The books are already posted on the BOOKS page. With the book on Doris Salcedo, Of What One Cannot Speak, these two form a trilogy. For the last five years I have been working on these reflections on how art an be political - politically effective, even - without being “about” politics. Each volume constitutes a dialogue between art and theory on this large and important question.
The Salcedo book examined this question in relation to sculpture. Thinking in Film takes the figurative image,the moving image, and then, especially in video installation, is the “case” to explore the issue of political effect. The artist whose work I analyze is Eija-Liisa Ahtila. And in Endless Andness the abstract work of Ann Veronica Janssens is the interlocutor for a dialogue. A few of Janssens’ works are in the June 16 post. 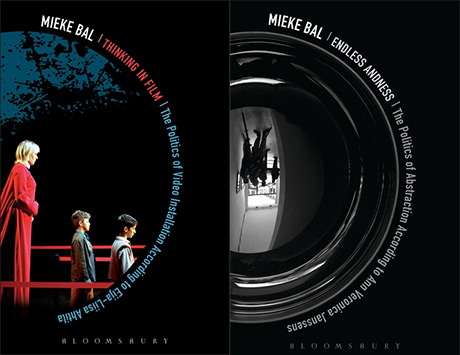 For each book, a “book launch” is in the planning. On Friday September 20th, we will have a gathering in Wiels, the great center for contemporary art in Brussels, to launch Endless Andness. The next day, less than 20 hours later, another book launching event will take place in Wellesley, Massachusetts, to launch Thinking in Film. It’s a bit crazy, but it so happens that Ahtila has an exhibition there. And only after setting up the event in Brussels did we realize an earlier launch at Kiasma (where she currently has a show) was not possible. I’ll take advantage of the somewhat hectic trip to ive several lectures and meet people. More on this in a next post.