Mathieu Montanier, our actor who played Fool #1 in A Long History of Madness and who plays Homais in Madame B., was briefly in Amsterdam. The Holland Festival had programmed Shéda, a turbulent theatre “event” by Congolese linguistic virtuoso author Dieudonné Niangouna. The play, by Niangouna’s company Les bruits de la rue, is an apocalyptic group performance where people tell others whom they don’t know their experiences at the end of time. They fight, shout, dance, fall apart or simply fall down; they sink, drown, impale themselves, but they never die. Are they gods, forgotten, myths, fallen heroes, the dust of failed loves? They are there, in Kakuma, the Swahili word for “nowhere”. They live in a time that, as one of the characters says, varies when no one worries, and stops moving when the people go elsewhere, as in the theater. Shakespeare is never far away! Mathieu plays an old man who has remained a child, tries to impale himself, and fights like the rest and the best.. This huge production took Mathieu to Congo, à Brazzaville, for rehearsals. In this photo you see him during one of those. 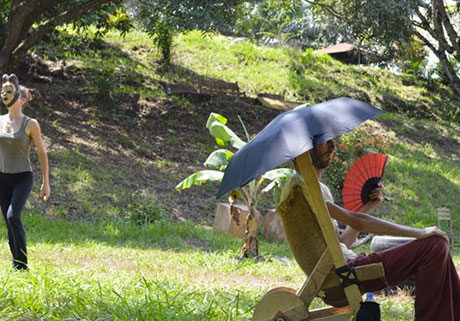 We took advantage of his presence in Amsterdam to shoot a short epilogue to our film. We had discovered after the fact that Flaubert had written an ending to his novel that stages Homais in a psychotic crisis, where he doubts his own existence. This was too good to be true: a postmodern Flaubert. In addition, this converged beautifully with the interpretation of the character Mathieu had intuitively produced. That, I am learning through these projects, is the genius of actors of this caliber. They put in more than we foresaw when writing the script, and retrospectively, they turn out totally right.
So, we had to stage this, and chose the chandelier store Crystolight in Amsterdam to put Mathieu among the reflecting crystals. It was, as always, a wonderful performance. Here, you see him in that mad situation. He is looking at the medal that has just been awarded to him, that “croix d’honneur” he had aspired to for so long. now that he gets it (Flaubert’s final sentence in the novel as published) he is completely falling apart (as per that unpublished ending we found). 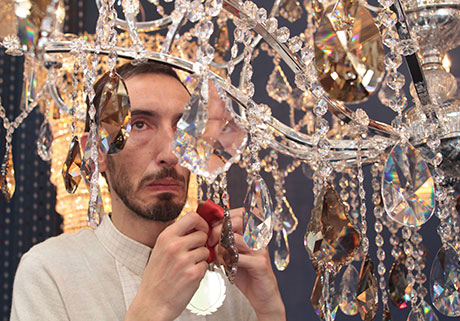 We had asked my long-term friend and former colleague Aart van Zoest to read a few lines Flaubert wrote, because we needed a voice distinct from Homais’. Aart is emeritus professor of French and a specialist of Peircean semiotics with whom I had collaborated a lot. The epilogue will be very short, but, we think, it adds another layer to the hysteria Mathieu has given to Homais’ character. 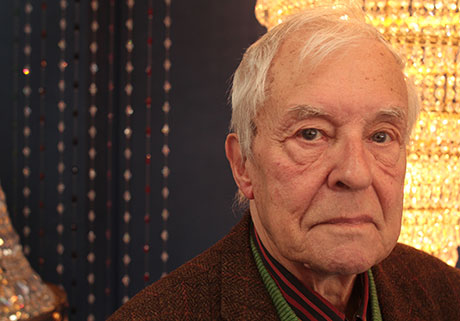