7Swim or Die from Cinema Suitcase on Vimeo.

This abstract, more or less descriptive scene only suggests a scene of Don Quijote / the Captive swimming desperately, after, we can assume, a storm has plagued the ship on which they were sailing. It alludes to the history of the author as well as that of the character, again blurring the line between history and fiction. This historical fact was the beginning of the endless captivity at the other side of the Mediterranean Sea. He – the figure of captivity, whoever he is – has gone into the sea to save himself, but he almost drowns. And then, when he resurfaces, he is captured by invisible enemies. The dilemma staged here opposes, or equals, death and captivity. This dilemma is constantly implicit in the novel, but not really elaborated.
In our interpretation, this subtle implication is due to the traumatic incapacitation. Again, a hint at contemporary situations is relevant. Although not direct, the allusion this scene makes to the actuality of migrants and refugees in the Mediterranean Sea is inevitable. Some of those are fished up and locked up in detentions centres or sold as slaves in Libya or elsewhere; many are left to drown. This near-drowning scene merges the main character, the secondary character (The Captive), the author, and the actor; the present and the past. That is why it is totally out of narrative order and filmed in an anti-realistic mode. Choreographed and danced, rather than told, it has no temporal progression at all. The second half of the scene adds another contemporary political allusion. When the plastic sheet that figures the waves begins to break down, suddenly we are in the middle of the crisis of plastic. The fight against water joins that against the plastic that destroys the seas.

The merging of the anger of the sea with the danger to the sea.
Photos: Lena Vehoeff 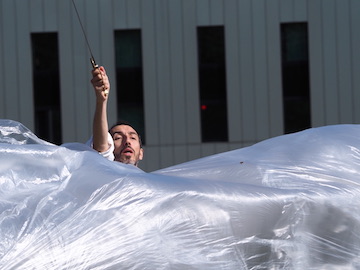 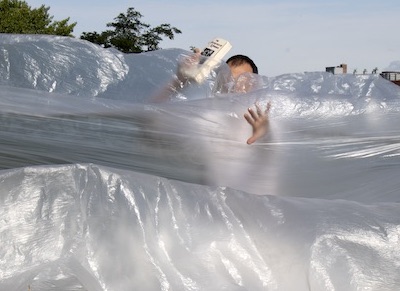 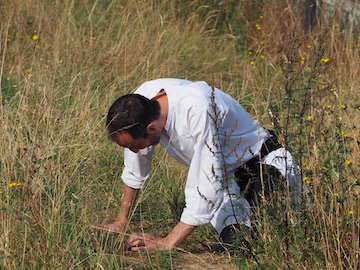