The musings of what communication is, how it can become difficult, and how it is done most effectively continues in this scene but now, it is focused on story-telling itself. This is the mode that Cervantes’ novel excels in, frantically pursues, and fails to achieve at the same time. The novel falls apart into fragments and short stories. The scene stages the incapacity to tell coherent stories yet the desire, the attempts to do so – a primary symptom of trauma. To present trauma without voyeuristically representing it, the point is not in the grieving we witness, but in the inability to finish the stories he starts telling, and in the resulting somewhat clumsy theatricality. The bits chosen from the novel alternate between philosophical musings included in some of the discourses, and summary narrative content. In the end, Don Quijote collapses in grief.
This has been filmed in a theatre, in order to foreground the theatricality-based pursuit of empathy in exhibition as this project proposes it. The stage and the platform are dark. This isolates the figure who feels desperate, failing in what he wants to do. The space loses linear perspective and becomes an unclear “non-place”. Sancho sits on the side as the prompter, whispering lines when the knight loses the thread of what he tries to tell. Needing help when story-telling is hampered is not simply a handicap. It can also be the royal road to the overcoming of the isolation trauma carries.

Don Quijote attempts to tell his story of war. 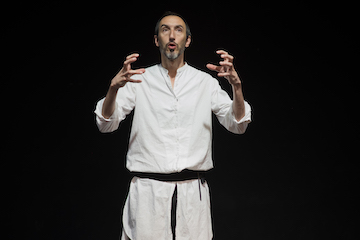 In despair, he experiences that he in unable. 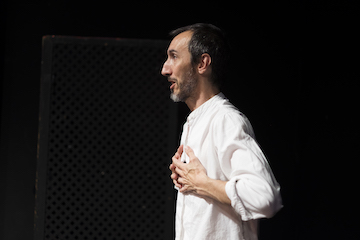 When he collapses, Sancho holds him to comfort him. Empathy demonstrated. 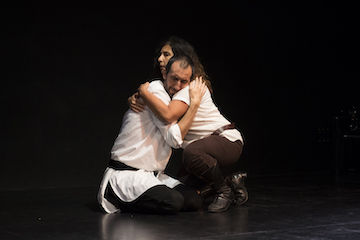