Who is this man we all know but who never existed? He is the carrier and spokesman of many of our own preoccupations and questions. In this episode, an artist and a narrator, simultaneously, are describing and photographing the portrait of Don Quijote – as a historian and as a fictive figure. This scene should account both for DQ’s world-wide fame, but as a book; and for his looks, which have become so emblematic, in spite of the fact that the well-known long, horsey face and emaciated body never lived. If we can recognize a figure who is entirely fictitious, what does that say about the presence of the imagination, carried along by the heritage from past attempts to imagine unthinkable things? The figure is the first to be astonished by the way he looks, speaks and thinks. It is also a commentary on the relationship between fiction and reality, the imagination and history. The episode combines bits & pieces from chs.1 and 9 of the novel. The mirror emblematizes the self-reflection we constantly practice, whether to see what we look like to others or to think about the point of what we do.
The images of Don Quijote intersect with serious discussions by people engaged with history. Quotations and contemporary views present inter-temporality. Discussions among the three thinkers evoke the polemics that were the after-effect of Hayden White’s ground-breaking analysis of the rhetoric of history-writing in Meta History (1973). Although White addressed nineteenth-century history, the passionate discussions that followed indicated that contemporary historians felt implicated. The discussions reached a large audience, with many non-academics participating. Hinting at these discussions actually links them to the views described in this early-seventeenth-century novel. This is an important intertemporal bond. This anachronistic bond is, in turn, foregrounded in the quotation from Borges’ famous short story “Pierre Menard, Author of Don Quijote”. The scene thus also brings up the vexed question of authorship and authority, put on the table by Foucault and Barthes in the 1970s, but here anticipated by the bond between the seventeenth-century novel and the contemporary video work. Over the voices of the three people discussing the value, need and possibility of history, we hear the narrator. At some point, the discussion becomes one, and the three discussants start listening to, and visually addressing the narrator.

Don Quijote doesn’t quite know who he is, and implores the viewer to acknowledge him. 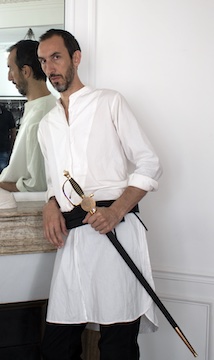 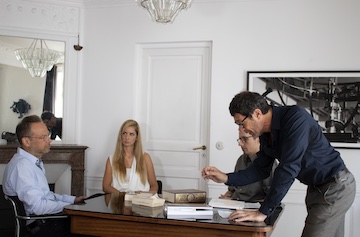 Borges’ narrator explains the lesson in “pre-posterous history”
but the students have their doubts: what is the truth and why does it matter? 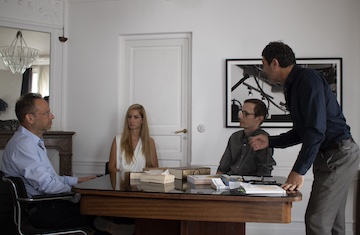