3Woman as Anti-Suicide Bomb from Cinema Suitcase on Vimeo.

Don Quijote and Sancho Panza are on the road. They don’t have a program, because the Knight Errant wants to do good but doesn’t quite grasp what is happening in the world. After reading books, he now reads society. Attentive to what they see and hear, the knight intervenes, whether or not his help is welcome. In the incident presented in this scene, good will, bad faith, and other social attitudes are put to the test. This episode, based on DQ I,12-14, questions the hysterical reaction to amorous rejection – the idea that some men won’t take “no” for an answer. It is an early modern scene of patriarchy versus feminism, and at the same time recalls contemporary sexual pressure. The woman opposes a firm “‘no’ means ‘no’” to this.
In addition to the beginning of Don Quijote’s pointless altruism (further elaborated in episode 12 devoted to it), this scene explores the idea, which might seem contemporary but is already expressed in Cervantes’s novel, that Marcela doesn’t need Don Qijote’s help, and that men who try to be “good guys” still reproduce some of the masculinist pitfalls in their interactions with women. The young men who lost their friend to suicide grieve, but then project their sorrow on the woman when she accidentally comes upon the burial. “Because” she is beautiful, they are contaminated by their dead friend’s despair, and blame it on her. To foreground this “inter-temporality” the audible dialogue consists entirely of quotations from the novel, except for the phrase “no es no”.
The moment Don Quijote hears the laments and the scolding of the friends of the diseased he decides to intervene. The young woman Marcela, however, can defend herself. Her speech asserts her right to independence and is convincing enough. Implicitly, the suicide is indicted, not the woman who chose to live her own life. But Don Quijote’s desire to feel important in his crusade against injustice leads to his being contaminated when he adds that Marcela may still have some guilt. She pushes him out of the way. This is the most feminist moment of the novel, and deserved to be foregrounded.

These students were heroic. During four hours in a burning 46 degrees celsius heat, wearing heat-attracting black, they wept. 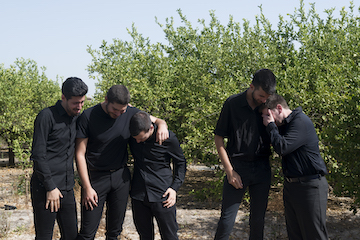 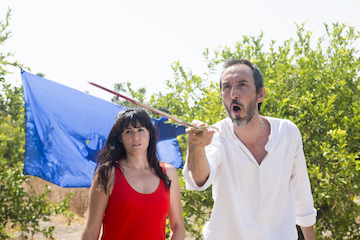 Marcela doesn’t want the Don’s help; she can fend for herself, and pushes him away. 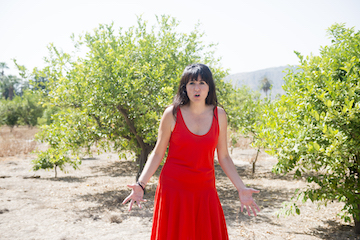