2 Setting Up, Engaging Sancho, Setting Out

Whatever the causality between fiction and reality may be, Don Quijote’s alleged madness consists of wishing to be useful, to do good in the world. Is that so mad? The question is, how to go about that. How to change life from the contemplative activity of reading, physically immobile, immersed in what the culture feeds us, to action, “going out” on adventures? What is it that interrupts the reading at home and entices the desire to go out – to move from immersion in fantasy to braving reality? This episode points to the question all committed artists and scholars ask themselves: what can we do? This key question is also on the mind of all those who seek, each in their own modest way and according to their capacity and means, to improve the world, the social texture of it, by being “good persons”. There is nothing ludicrous about that wish. In this scene, we stage some ideas concerning the resulting confusions, combining several chapters from the novel.
We seek to preserve that fine line between (enforced) passivity and (desired) activity, not quite overcoming it. This is compounded by the equally fine line between individual and social. Don Quijote’s interventions frequently seem to ignore that line, and thus come across as unwanted meddling. The madness consists of and enacts those lines as irresolvable. The scene is self-reflexive, raising issues of art-making. It makes the transition from the production of an audiovisual work as an element of reality to the fiction that results. This is far from a smooth transition. Labour conditions are evoked when Don Quijote engages Sancho Panza. This merges the past (literary heritage and real horrors) with the present and its continued abuse of workers. Also, the mixture of languages becomes clear. Sancho speaks Castellano, Don Quijote French. Confusions of gender, of class, of educational levels appear as analogies to the alleged madness. They hamper smooth communication but also encourage reflection and thus, improvement of that social activity. As a second introductory screen, the episode requests visitors to think and form an opinion on the issues raised. 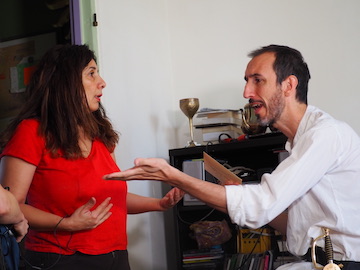 Don Quijote is cleaning his sword 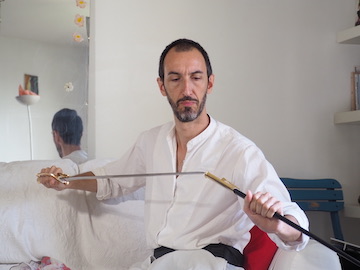 Don Quijote tries on a helmet (of sorts) 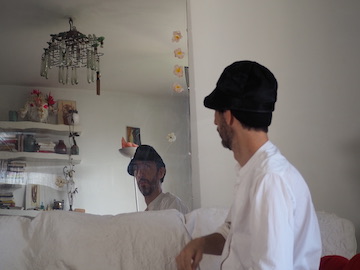