What everyone knows: reading is DQ’s primary transgression, defect, or seduction. According to the common interpretation of the novel, it drives him mad. As Flaubert also implied in Madame Bovary, the novel constantly insinuates that reading is maddening. But there, too, this assessment is subject to doubt. True, the screen shows a figure, completely absorbed in his book. No interaction with the viewer is facilitated. Although reading is not usually seen as an action, especially not compared to Don Quijote’s hectic adventures, here, in this “primal scene”, reading consists of (tiny) actions. These infra-actions hint at another aspect of reading: captivating, it captures, confines, holds the reader. Thus, it becomes a discreet, barely visible metaphor of captivity. The hardly visible actions are like the captive shaking the bars that hold him, as we see in the scene “The Captive’s Tale”. The act of reading is the birth of the character and, according to traditional interpretations, of his particular kind of madness. But this remains ambiguous. Is it reading that drives him mad, or is he hiding in reading to at least imagine himself free? Captivity generates the desperate need to free oneself. Reading is also what visitors are encouraged to do: immerse themselves in the other world of the fiction that is proposed. In this sense, this initial scene is also an invitation, a welcome that suggests the responsibility that enjoying hospitality entails.
This scene is different in spirit and aesthetic from the others. It can serve as an introduction, as a transition for visitors between their real lives and the fiction they are about to enter. Which raises the question of that relationship in the life of Don Quijote. Which came first? It raises questions concerning the imagination, and its relationship to reality. Is there anything that fiction does not touch? With this introductory scene, we wish to keep that ambiguity alive and productive. We see the figure immersed, expressive, and moving from sane to mad, or from happy to sad. At the end of the eight-minutes, he leaves the scene, emptying the space for us to enter.
We also seek to invoke the bond between past and present by setting the scene in a contemporary, domestic environment. The housekeeper and the priest, two figures from the novel who try to intervene with Don Quijote’s best interest at heart, are present, but no interaction between them and the future knight-errant occurs. This points to the idea that two different worlds are present but hermetically sealed off from each other. It implies a devastating situation where the social world cannot reach the individual. 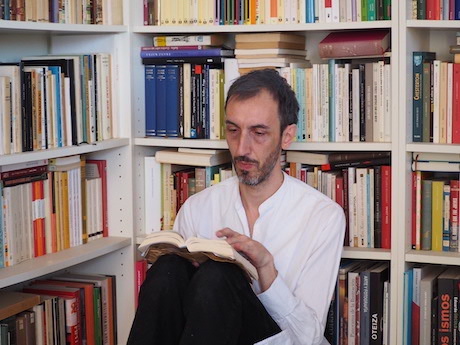 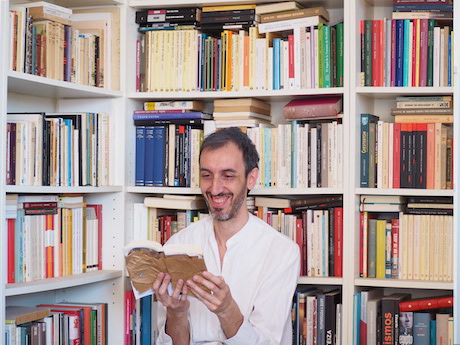 anxiety and pleasure alternate in the reading. Photos: Lena Verhoeff

When we went shooting in Paris for other scenes, this mural drew my attention. The Don is everywhere, and his compulsive reading is the first target of mockery. 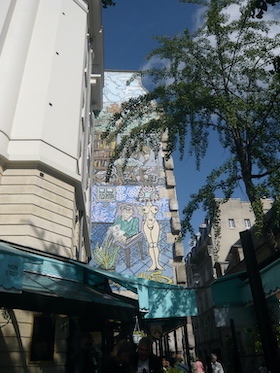