This exhibition took place in the framework of the annual conference of NECS: the European Network for Cinema and Media Studies. It was installed in the new building of the university of the old/new city of Gdansk. In ruins after WWII, the city was completely rebuilt in the old style, rebuildings based on archival drawings and photographs. 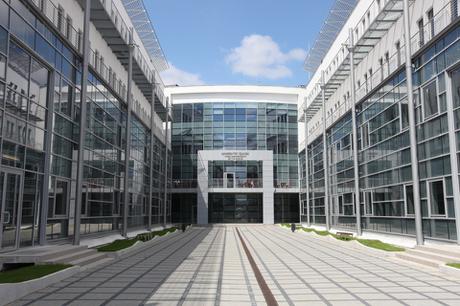 The contrast between the cozy old city that barely betrayed its newness, and the all-glass university building of the faculty of Social Sciences is quite striking. I had a great time being guided around the old town until reaching the new buildings and their museum of Solidarnost with Lech Wałęsa still there. My devoted guide, companion, and colleague was Mirosław Przylipiak, who never showed the slightest sign of tress while being responsible for the organization of a huge conference; not even when his car refused to ride. He gave the noun “hospitality” a new meaning, turning it into a verb; not “hospitalizing” nor “hosting”, but rather something like “befriending”. 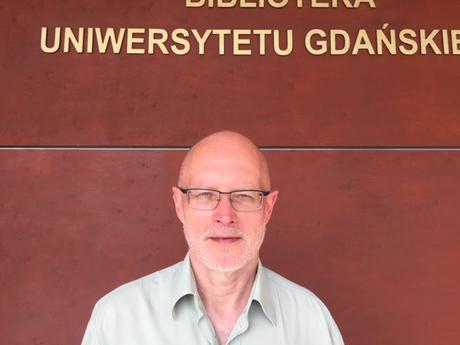 ‘Story-Telling in Bits & Pieces’ combines three installations: What Culture Silences, Precarity, and Reasonable Doubt. They cannot be shown on a single image, due to their placement. Apart and together, their placement foregrounds the idea of fragmentation, while they are still close enough that you can hardly skip any of them. These three installations, in turn, each combine video screens with photographs, mixed so that it is hard to tell at first sight which image is still and which is moving.

In corners of a public space, in the library of Gdansk University, you are invited into fictional worlds for the time you wish, as a break from reality and its compulsory time-space, sipping coffee, chatting with others, or going for it alone. Instead of linearity, an immersive installation allows viewer-participants to shift around and take their time according to personal interest, patience, selective engagement with the stories of which bits and pieces are shown, in videos and in photographs. The idea is to realize a one-t-one relationship in a context of multiplicity, and thus experience a sequence of events of stepping out of one’s routine. The installation consists of three ensembles of video fragments. They are separated from one another by the architecture of the space, presenting the un-linearity in time and space both. They are also different in their implicit ‘arguments’. This embodies the freedom of thought.
The three photos of the installations on the right here were made by Jaap Kooijman, academic vice-director of ASCA. It was lovely to hang out with him for a few days. This photo was made by Catherine Grant, one of the two other keynote speakers, who showed her work in video essays. 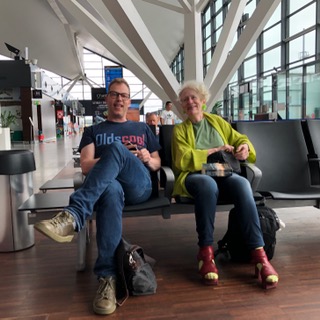 What Culture Silences presents events and dialogues, bits from the project A Long History of Madness, made with Michelle Williams Gamaker (Cinema Suitcase), as our first “Theoretical Fiction”, 120’, 2011).
As the title suggests, madness - mental health issues, as we would now call it - has a long history. Its social importance cannot be overrated. The loneliness of those we shun because they seem different is caused by the traumatic events that same “we” - the society that cuts off the social bonds with the mad, locking or drugging them up - has caused, and remains responsible for. Madness is the last frontier, beyond the boundary of what the large majority considers acceptable, yet full, not only of profound wisdom but also, of bits of pastness stuck in bodies, bits we all share, and in this sense, a model of why memory matters, and of what is the matter with memory in our culture of oblivion.

Precarity presents fragments, or small incomplete scenes, from Madame B, also with Michelle Williams Gamaker (Cinema Suitcase), 2014. This is a project that questions the culture of intertwinement of emotional seduction and the capitalistic driving force we call ‘debt-drive’. This five-screen installation puts forward different contexts of precarity in today’s global society. Everything, from health to relationships to labour rights and human rights as well as economic survival is precarious. We attempt to bind these areas together in their audio-visibility.
Based on Flaubert’s prophetic novel Madame Bovary from 1856, the five screens show the precariousness of an adult life beginning; the world that seduces her into risking what she has and craving for what she doesn’t; and when, grasping at last straws, she takes more and more dangerous turns, and thus, inevitably, she ends in misery, both economically, psychically, and physically. Meanwhile, from the edge of the space where her life plays out on screen, we see how this is not an individual ill nor a blameable transgression but something towards which she has been pushed all along by her surroundings. Especially the meddling pharmacist Homais represents the probing of the curious and the rejoicing in Emma’s misfortune and downfall.

Reasonable Doubt binds these unfortunate events to our tasks as academics. In view of the current madness of the world, I have been pondering what has happened to thinking, which seems replaced by screaming, or worse. Affirmations we must endorse are thrown into our faces; no doubt is allowed. This has enticed me to explore imaginatively what thinking is and how it is done. The film Reasonable Doubt (2016) is an experiment in audio-visualising thought. The film stages scenes from the lives of two famous persons, stars in their time: philosopher René Descartes and Queen Kristina of Sweden. People are more eager to hate, despise, or surpass Descartes than to know him. Queen Kristina, almost forgotten, has recently had a comeback thanks to feminist and queer interest in this eccentric once-upon-a-time celebrity. But an over-the-top exclusive focus on Kristina’s interest in women may also be used to eradicate her intelligence and autonomy, her capacity and willingness to doubt, while in the same move depriving her lesbian interest from its subtlety and complexity. It overlooks the idea that doubt nourishes thought.

The installation was conceived and realized by architect Marek Zygmunt, who came up with the original idea of making three installation spaces both singular and open, so that visitors were as free as one can possibly be to choose where to start, how long to stay for each piece, and also, how to make connections among the three sites. I call this snapshot “building support”, a phrase to be taken both literally since the three men are building a support wall for the artworks, and figuratively, as the set-up is a great support for the works’ effect. Here you see the labor of building support: Piotr Grdeń, Daniel Burdalski and Marek Zygmunt. 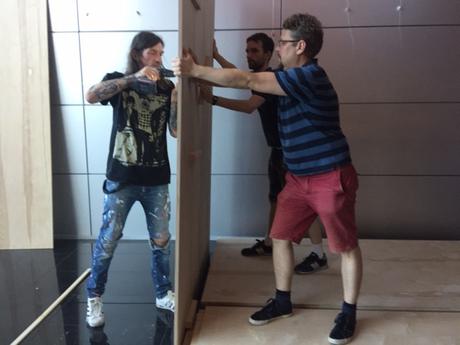 Below you see Marek (on the left) taking a well-deserved break, with Sebastian Jakub Konefał, who gave constant support during the set-up process but also during the conference. Whenever I look up from doing or talking, he as there, ready to do what I might have wanted done. Truly amazing. 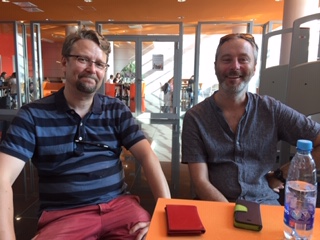 The installation makes a plea for the politics of movement on the basis of Henri Bergson’s philosophy of the image as necessarily both material and moving. This leads to a view of images as involved in a triple movement - of the image, the viewer in exhibitions, and the emotional intensity images generate. This leads to a vision of political art that is not “about” politics but performs an intervention in “the political”. The triple movement inherent in the image as such is the basis of action, activation, and activism all at once.
The fragmentation in Bits & Pieces of stories entice visitors to compose, decompose, recompose their own stories and think their own thoughts.
The bits & pieces, or the necessarily fragmented state of stories that the age-old tool of montage causes, and either obscures or foregrounds, are connected, or sutured, by and in the merging of voices and visions, and the impossibility of firmly distinguishing these is the power of film; its primary structure. In the installations as well as the accompanying keynote address, I made the case for the importance of focalization for the bond between the techniques of story-telling, their aesthetic appeal, and their political power. In the lecture I drew my examples from Madame B. That film is NOT an adaptation of Flaubert’s novel but a response to it, consisting of reflections on persistent issues of narrative that pertain both to the respective mediums and to political questions. In each one, the point is to connect a technical issue with a political one through a comparative analysis of the linguistic, literary text and the filming work. This connects my triple presentation - exhibition, lecture and film screening - to the research group on Intermedial and Multimodal Studies at the Linnaeus University if Växjö, with which I closely collaborate. The members of that group were very present in Gdansk, giving lectures and participating in discussions. You see some of them in the photo captioned “seriousness and fun go well together”.

Let me wind up with the question: why must art be politically relevant, as my work attempts to intimate? 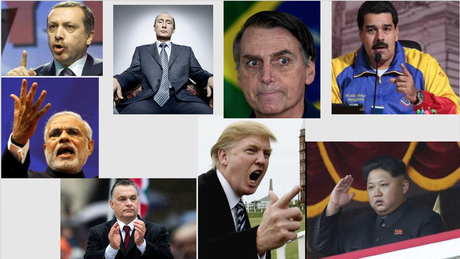 Our time is not post-digital, but it is post-democratic. We live with “democratically” elected dictatorships all over the world. And even in our own academic habitat, with chrono-logical arrogance, we disavow the moment – which was my political, intellectual and artistic initiation – of May 68, when the imagination had its brief power to participate. Were we naive, utopian-crazed? Or was this an initiation in creative, imaginative, imaging thought, where solidarity was not obsolete? I still feel the thrill of that moment. 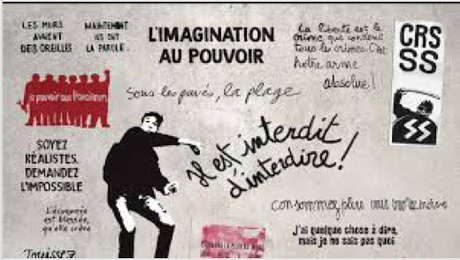 Instead, we accept, condone, in powerlessness that that true democracy is traded for an acceptance of “neo-liberalism” – which is neither new nor liberal, capitalist on the outside, Stalinist on the inside, as Enzo Rossi phrased it – we need, politically, to take narrative, in all media, seriously for its capacity to make us imagine. The political power of focalization is its capacity to persuade, manipulate, raise empathy, raise objection, imagine otherness as within us; hence, to entice thinking with implication, including emotional. Ambiguity on all front is what it creates, thus allowing the imagination to participate; and that is what makes its political effectivity possible. This is why my passion is the intricate intertwinement of artistic and academic thinking-together. The woman sitting here was the first visitor, an hour before the opening, and the last to leave. She must have been thinking during those hours, in dialogue with what she saw. 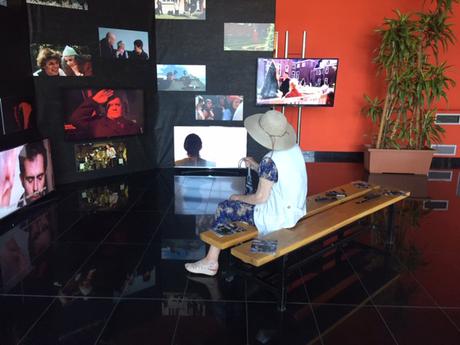 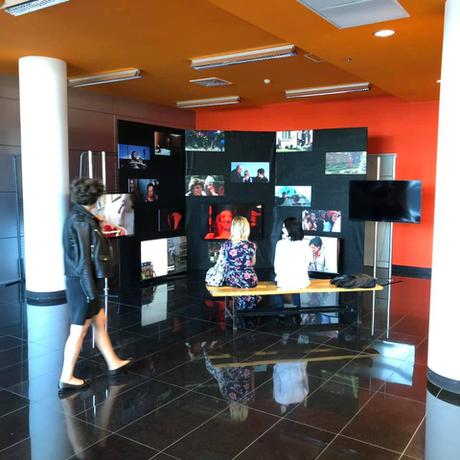 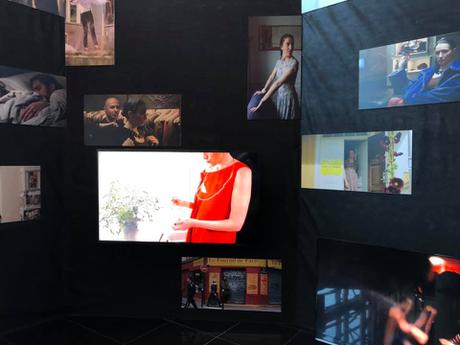 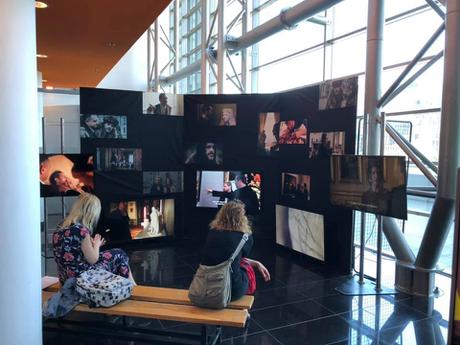 The photos in this series were made by Jan Saczek and Oskar Waldowski.

Looking and thinking together

in my opening talk I tried to link art with thought

seriousness and fun go well together, too

The viewer's freedom to come and go