The Cultural and Intellectual Centre Castrum Peregrini is devoted to the legacy of the artist and resistance heroine Gisèle d’Ailly van Waterschoot van der Gracht (1912-2013) and her fight against fanaticism, ignorance, and the repression of creativity. I am very proud that my project has now been inserted in the long list of activities of Castrum, summed up in the phrase “we are what we remember: Memory Machine”. The Centre’s endeavour to stimulate collective thought and action is a very suitable context for Reasonable Doubt‘s attempt to audiovisualize the collective, social and sense-based nature of thought. I met the wonderful team, Michael Defuster, Frans Damman and Lars Ebert when in Autumn 2015 I asked to borrow, in addition to a gown to perform as a judge in a discussion performance Nina Folkersma had organised, their basket for the scene in Descartes’ garden. On the photo with Nina and two of the three Castrum workers, Lars is missing; he took the photo. 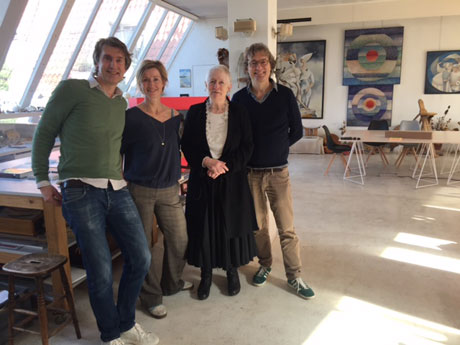 The photo of the basket filled with copies of the booklet about the project stands for another material connection. That basket appears in one of the videos, when Descartes collects botanical samples in his garden, assisted by his valet (Simon Ferdinand). 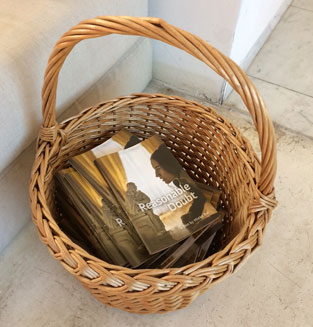 From the street on the Herengracht one can see a slide show through the window. If the grid in the glass suggest a prison, this false impression (especially false for a Centre devoted to Freedom & Friendship) we can take that to evoke the way we have imprisoned Descartes in a false reputation. My project attempt to hint at another Descartes, whose rigorous but social and sense-based rationality the world today badly needs. 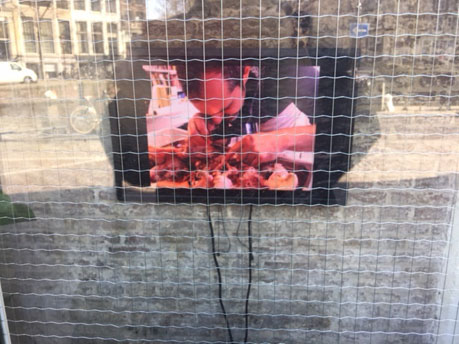 The exhibition space is the artist’s atelier on the top floor. Gisèle’s paintings, shell collection, dried flowers, furniture, books and souvenirs, even her newspaper cut-outs are still there and remain a concrete legacy of this extraordinary woman. In the context of this year’s theme of Castrum’s activities, Women’s Perspective, curated by Nina Folkersma, this material legacy accrues renewed vitality. Nina has developed a brilliant sculptural concept for the exhibition. The five monitors are mounted on sculptural wooden structures painted in the colour of the wall of Kristina’s palace where the (mis)encounter between the Queen and the Philosopher takes place. Here you see Nina in action. 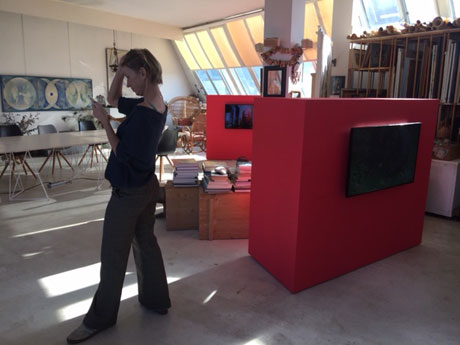 Here you can see, in the right foreground, Jon-Ove Steihaug and Jeannette Christensen, who came from Oslo, where we had been intensely working together on Emma & Edvard: 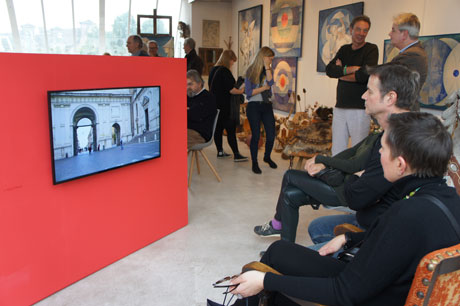 The exhibition space is on the third floor. All through the stairwell, Nina had put these quotes on the walls:

Descartes: (…) intelligence is a mixture of affect, memory, of the imaginary.

Chanut: It seems you doubt, don’t you?
Descartes: Yes, I doubt, always.

Kristina: They say that women are empty vessels. But we wouldn’t be vessels, empty or full, if men didn’t treat us like vessels.

Descartes: Nothing is complicated. You must work, continue to work, to write, to read, to perceive the things of life, and to think
…
and you must imagine, dream of what man could be, and create, create, create
…
and hold generosity high. That’s important, generosity.

During the opening Lena Verhoeff filmed the event. I have edited her footage into a 5-minute video tour. It gives a good impression of the atmosphere of the well-attended Saturday event. Because I had planned it to be opened the day after the Big Surprise event Friday afternoon (see a big surprise ), which in turn we had planned to coincide with the opening of Nalini Malani’s exhibition Transgressions, many of the international guests were able to come to the opening as well.
Here is the video of the opening:

This panorama photo by Nina is not a real representation of the space. Castrum is having its annual International Board meeting between our setting up and the opening of the exhibition. For this reason the large table is installed and two of the sculptural structures moved to the side. But the photo gives a good impression of the space with Gisèle’s things in it.

My prejudice against selfie-aesthetic is entirely confirmed again, but at least Lars is visible now (on the right). And the counter-light is in fact something I use a lot in the filming. 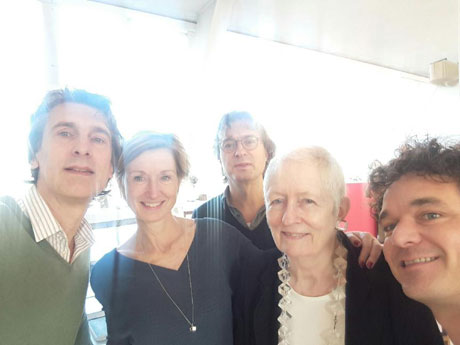 The opening on Saturday March 18 was fantastic. The exhibition looks wonderful, lots of people came, among whom former students I failed to recognize… After her brilliant curation, Nina Folkersma conducted an excellent interview, which was livestreamed on Facebook. you can see it here - for all those who missed the Saturday-Night Fever.

The photos in the first gallery here were made by Sipke Westveen:

The combination of the stark magenta-coloured wooden cake slices and the many objects that give Gisèle’s atelier a flavour of a living-room, a feeling of homeliness, works precisely because of the contrast. This is what foregrounds the historical layeredness of it all. Later, I received alumni of the University of Amsterdam. They were there for two hours, and found it was not enough! Their comments were profound and really helpful for my own understanding of the work.
Here are some more photos, made by Frans Damman, who works at Castrum Peregrini, where, together with Lars and Michael, they continue in the spirit of Gisèle to stimulate resistance and friendship, cultural memory and discussion.

Lars introduces the conversation between Nina and myself at the opening, which resulted in the the video mentioned above. 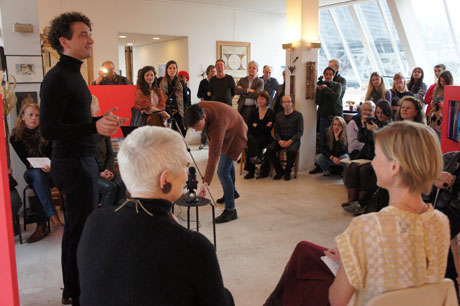 Finally, here is another image of the preparation of that conversation, with Nina as a wonderfully active interlocutor. I have loved working with her, and hope we will do it again one day. 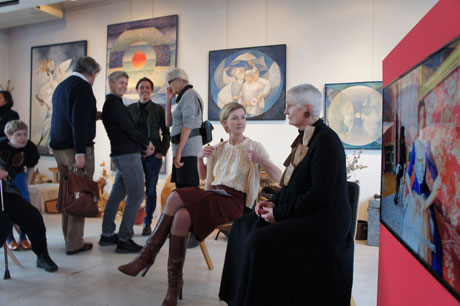