After Colombia, the next exhibition was at the other side of the globe. It was a beautiful exhibition in three adjacent galleries. The video here gives an impression. Michelle, was travelling to India, so she could not come, unfortunately.
What made this show special was the context. It was organised as one of three exhibitions, all three addressing the theme of a conference that was held simultaneously with the opening. The conference was devoted to “The Image in Question”. It was meant to explore the current situation with an overflow of visual information and at the same time doubt about veracity, validiy, affect and artistic merit.

I gave the opening lecture, devoted to artists who attempt to give images new life by connecting to history in novel ways, where the starting point in the present is part of the image. I discussed work of Monika Huber, Ann Veronica Janssens and Stan Douglas.
Michelle and I have for a long time had a great interest in integrating art and research in such a way that the creativity in analysis is recognised and nurtured, and that art is recognised for its proposals of new ways of seeing; hence, also a form of cultural analysis.

The three exhibitions of which ours was one, questioned the image in their own ways, each differently. One exhibition was a monographic show of an artist known for his “outsider art” - a term I find problematic, but the art is very captivating. The second was a group show of artists related to the Sydney College of the Arts, teachers or former teachers, or advanced students. The title, “The Sceptical Image”, made the connection to the conference topic. Some of the works were amazing, with strong and unexpected connections to our exhibition. Madame Bquestions the validity of images in its own way.

The exhibition was displayed in three generous spaces, without separations between them. The beginning gallery had scene 1, Everyday Life, scene 2, Emma’s Education, and scene 3, Wedding, disposed in such a way that the first two lead straight to the wedding. In the second space a cube had been built for scene 6, Passion and Disappointment, and before that, scene 4, Boredom Sets In, projected in a corner, made a great impression on a 10-year-old boy, who sat there for half an hour.
Behind the cube with scene 6 photographs are hung. That display was not yet ready, so I have not seen that yet.
The final gallery had scene 7, Loving Léon, projected on a large wall. The cinematic feel we always try to give that scene was very successful. Finally, scene 8 The End, in a beautiful oblique row of crisp led screens, worked also very well.
The hard disk with the files had been lost in the mail! I was then to bring a new disk with me. So, the crew had only a few days, and that they managed to install it all is close to a miracle. They were simply heroic. And, rather than being nervous and tense, they were great fun. As you can see. 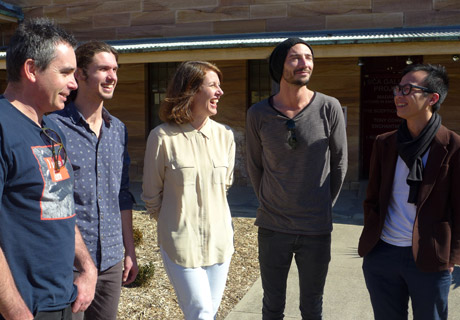