Here are just a few photographs from the selection as they are exhibited along with the videos. 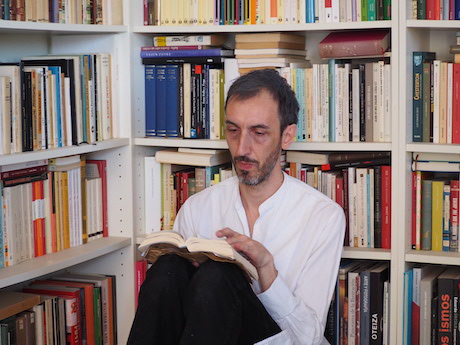 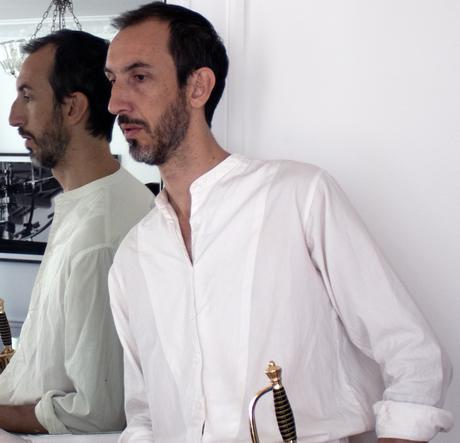 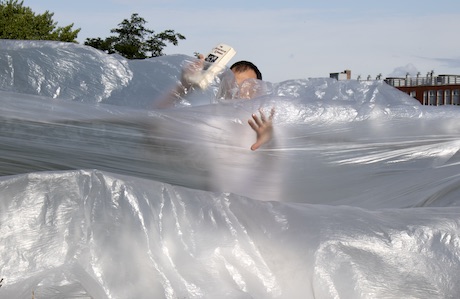 Swim or Die. Photo Jeannette Christensen
Then: Fighting the sea… 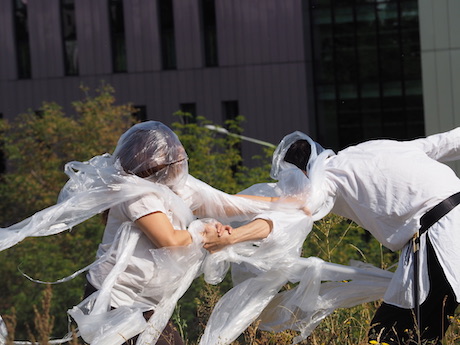 Swim or Die. Photo: Lena Verhoeff
Now: protecting the sea against the plastic 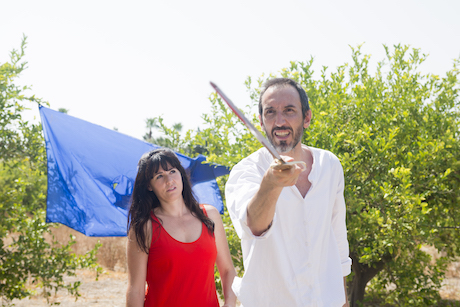 Woman as Anti-Suicide Bomb. Photo: Mar Sáez
Marcela’s firm “no is no” against the brandishing of the sword is the most feminist moment of the novel 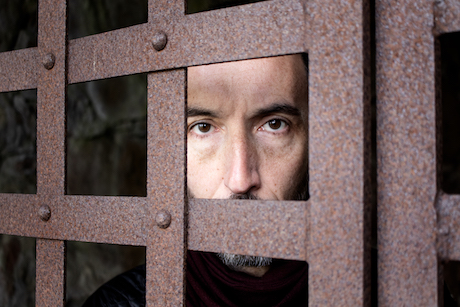 Sprinkling Events in which the Past is Today
In the late sixteenth century, a young Spanish soldier was captured by Corsairs, and sold into slavery in Algiers. This was primarily a commercial endeavour. From 1575 to 1580, the young man had no idea if and when he would ever get out. Imagine the feeling – or rather, the incapacity to have any. Yes, we need the imagination, in the face of such un-representable events and situations that we call “traumatic”. Captivity is not only a horrific experience, but the worst of it is, not knowing if there will ever be an end to it. Time loses its meaning. And it stretches endlessly. Into today. This harrowing temporality is at stake in this exhibition, in confrontation with the temporal liberty offered to the visitors. Miguel de Cervantes Saavedra (1547-1616) was that young soldier. With his Don Quijote, he wrote one of the world’s primary best-sellers after experiencing five and a half years of captivity as a slave in Algiers. He must have been deeply traumatized.

The notion of trauma has recently been over-used and hence, is in danger of losing its specific meaning, and consequently, the social recognition and the possibility to help traumatized people. In this project, “trauma” is considered as a state of stagnation and the impossibility of subjective remembrance that ensue from traumatogenic events; not the events themselves; the distortion of time and its forms that result, rather than the violence that causes the trauma.
If such a literary work has achieved and retained the world-wide status as a masterpiece it has, it is first of all because it has not lost any of its actuality. Its time, too, stretches into the presence. Not coincidentally, the novel is based on what the great specialist of Cervantes, María Antonia Garcés, has called, in the subtitle of her edition of a contemporary witness statement, “an early modern dialogue with Islam”. Formerly, in deep history, things happened that still happen, or happen again, today. Hence, “the past is today”.

To renovate, taking it seriously, our thinking about trauma for today’s world, as well as the way visual art can contribute to that understanding, the brilliant photograph by Swedish photographer Ebba Sund that serves as the icon of this project, is key. The man’s mouth is muzzled; he cannot speak, says the two-dimensional image. But his eyes do speak. They implore our help, our empathy. Art, the university, and the public domain: the point of this project is to bring these together in a dialogue without mastery. The question of art’s potential to help counteract violence’s assault on human subjectivity is examined on the basis of these video installations and photographs. The goal is to encourage empathy. Through being touched by the installation’s form, viewers can learn from it for dealing with their own experiences of the violence contemporary society can generate, their own as well as those hinted at by others in their surroundings. This attempt to make art exhibitions work for this social problem aims to repair what Cervantes called the “broken thread” of memory.

With actor Mathieu Montanier I had been mulling over the question: how to finance this project, now that my academic employment, hence, access to subventions, has been terminated? But since both Mathieu and I are not the kind of people to let such trivialities deter us from the ambitious project we had been considering, we just went on conceiving what became a 16-channel video installation. Early on we decided this project could not become a feature film, as our earlier video projects had become. This conviction was due to the artistic and social loyalty to Cervantes’s novel, which we had also pursued in the earlier films. The chaotic, incoherent form of study-telling of the novel needed an interpretation that would help conceive of a suitable form. This became the key-word: trauma. The traumatic state due to captivity, to slavery and its timelessness, made a linear film impossible.

Because we are not envisioning a feature film, the information on this project must be different from the previous ones. Further information on the content of the scenes will be placed on the page Installations. Under “Exhibitions” each particular exhibition will be presented. Once we had decided on our course of action, the first big decision was to cast Sancho Panza, and on Mathieu’s suggestion we invited Viviana Moin, a well-known performance artist from Argentina living in France. It was the best choice, and together, Mathieu and Viviana created fantastic scenes.

At some point, to be precise: on May 1st 2019, we had the opportunity to shoot the first scene. This became the poster video for the exhibition Contaminaciones: leer, imaginar, visualizar / Contaminations: reading, imagining, imaging. A week later, we went to Växjö, where two research institutes I have been involved with since 2018 had vouched for a budget to make the final 3 scenes. Concurrences, Centre for Colonial and Postcolonial Studies (dir. Johan Hoglund) and the Centre for Intermedial and Multimodal Studies (IMS; dir. Lars Elleström) had quickly become an intellectual second home.

Convinced by the relevance of the project and encouraged by these beginnings, the Dean of the Faculty of Humanities at the University of Amsterdam then donated an amount that was 10% of the total budget. And then the miracle happened: thanks to the incredible generosity and solidarity of many people, especially in Murcia and Växjö, the expertise and vision of the same, it all got done by the end of August. On September 25th a first installation of 5 channels, selected around the issue of communication problems, opened at the University of Amsterdam. Niklas Salmose, a member of IMS, took it upon himself to make it possible that the full exhibition had its World Première on October 31, exactly six months after that first shoot in Murcia. 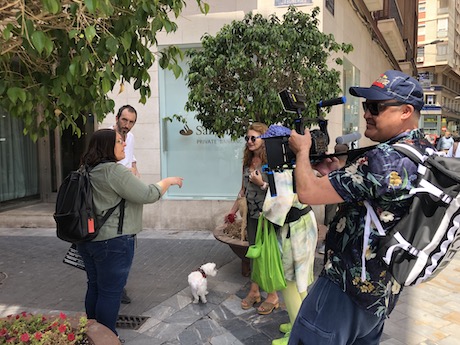 Here is Isabel Durante, co-producer in Murcia, on May 1st, instructing the woman-with-lapdog in the funniest scene of the installation. Don Quijote aggressively tries to help people who don’t need nor want his help.