Concept of the exhibition
This exhibition is not a retrospective – a genre that suggests a complete overview of an oeuvre. To foreground the idea that nothing can be complete, this exhibition consists of fragments. The fragments, accompanied by photographs, have been selected from the materials of three large fiction video projects, each consisting of a feature film and a series of installation pieces. The projects are A Long History of Madness (2011), Madame B (2013), and Reasonable Doubt: Scenes from Two Lives (2016). The first two were made by the artist duo Mieke Bal & Michelle Williams Gamaker, the third one by Bal. The films have been screened at a variety of occasions, and the installations widely exhibited. But never has the argument been made that this exhibition puts forward, and that binds the three projects together.

Here you see a short (4.45 minutes) video tour of the exhibition, by Lena Verhoeff. In line with the exhibition itself, the video alternates moving images with photographs. Some of these are also embedded in this page, in case you wish to see them for your own chosen duration. This is one of the points of video installation as I see it. In this case, where the three films exist and where actors recur in the fragments from each, “confusion” replaces narrative, on all levels. Even black-and-white photographs are included, delimiting the exhibition from the next project. And the video mixes installation images with the finished show.
The guitar music is from Andres Segovia, who stimulated me to learn guitar at age 10. My first Spanish influence.

The exhibitionary argument is this. Nothing is complete, but neither can things be separated rigorously. The cultural activities of reading, imagining, and seeing or making images all hang together. The title “contaminations” indicates this overlap, the fluid demarcations we are used to bring to cultural domains, between words and images, still and moving images, material and mental images. The key word is “between”; not the categories, the “boxes” we need to distinguish things in order to make sense of the otherwise chaotic world, but the thresholds, the spaces where the elements of these cultural areas meet: as events, activities, rather than things. The underlying thought is that cultural life consists of performative events: everything has impact for those who see, or otherwise participate in the process. 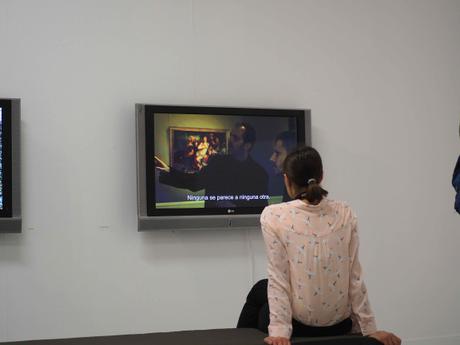 That is why the “poster” image of the exhibition, which announces my future project of which this screen presents the first installment, combines the three activities in the famous figure of Don Quixote. While reading, he imagines, and sees in front of him an image that he cannot distinguish from reality. That is why he is considered mad. Madness: this was the topic of the first of our fiction projects, but there, not emerging from a book the patients read, but from a reality that has hurt them so deeply that they cannot return to reality.In line with this insight I interpret Don Quijote in the opposite sense as tradition has moulded him. He has not become mad by reading, but he attempts to escape from the cruel reality of his time into the books. You see Don Quijote on the screen, and in front on the left, immersed in thought, camera operator Jesús Segura Cabañero, a well-established artist and professor of Bellas Artes. 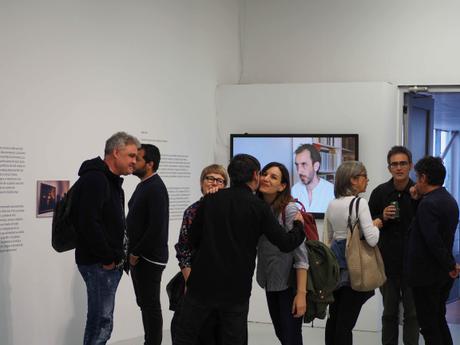 Miguel Á. Hernández, professor of modern and contemporary art, poet and novelist, a colleague who has become a close friend, has made a beautiful exhibition on the basis of the newly edited fragments from the films. Miguel and I have worked together ever since we met in 2004. We co-curated the traveling video exhibition 2MOVE in 2007-08, where we “argued”, audio-visually, for a close connection between migration and video - two forms of movement (2Move). This was an intense experience of collaborative research that tightly bound the practice of curating to the academic questions Miguel and I were both struggling with. Miguel also initiated and curated my early exhibition La última frontera.
As you can see here, this multitalented man can also act. In the new project Don Quijote he plays the priest. I have never seen him so earnest-looking. 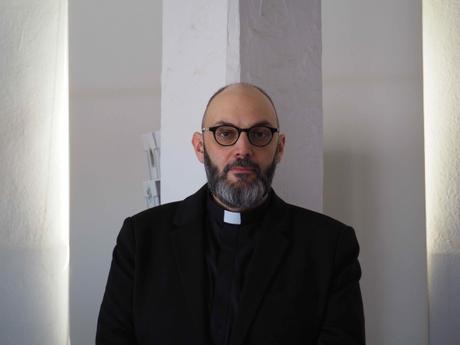 During our visit for the installation and opening, French actor Mathieu Montanier performed a reading from Don Quijote. Here you see him rehearsing for that performance. Mathieu ha been a crucial actor in all three “theoretical fiction” films, and you can see him frequently in the exhibition, such as here on the right, in A Long History of Madness, on the screen. I am very excited about the new project, where he will “do” a Don Quijote different from all other film versions of that unfilmable novel. 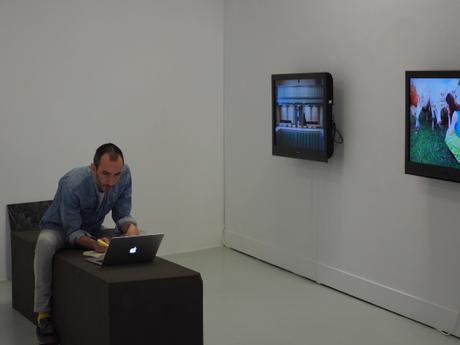 The photos and the video tour have been expertly made by Lena Verhoeff.
During the busy days preceding the opening on May 2d, she takes a moment to look at her earlier self. In A Long History of Madness she made her debut as an actress, at age 5, with her brother August Voskuil. From the young child expressing astonishment she has become an adult serious photographer, specializing in portraiture, and video maker. 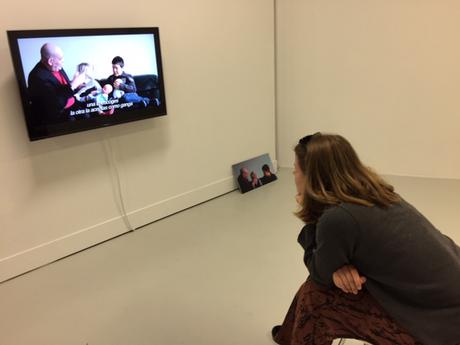 Lena came along as an “intern”, and we had a great time together. During the Sunday shoot of scene one from the Don Quijote project, she fulfilled the role of set photographer and set assistant. You can see her doing the clap in this photo of the editing, with Luz Ruiz who also did the sound recording. 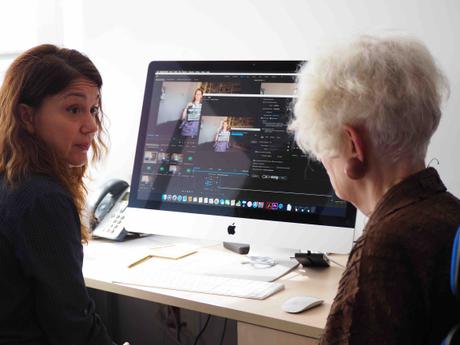 Ten years ago, Lena played Pippa in A Long History of Madness and already showed her interest both in film and in acting. Here you see her earnestly studying her part, from the story-board Michelle had drawn. 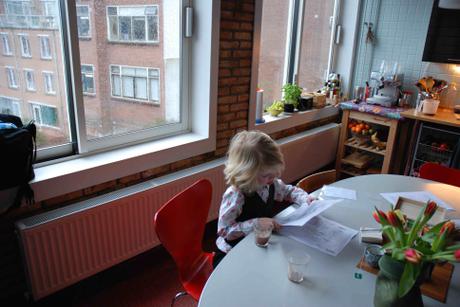 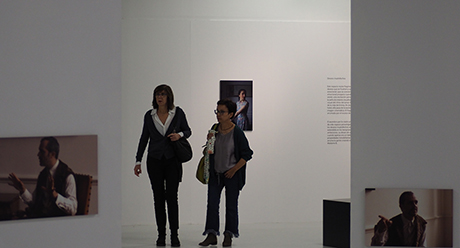 Curator Miguel and I answer questions of the press during the press conference, preceding the opening. This was, for me, an experience of value: hearing someone else explain my work in ways that enriched the meanings and aesthetic. 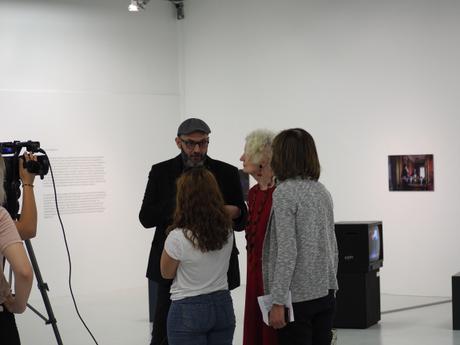 Miguel participates actively in the material, physical installing process. This is why his exhibitions are so effective; he doesn’t leave it to the technicians alone, shares the tasks in total equality. 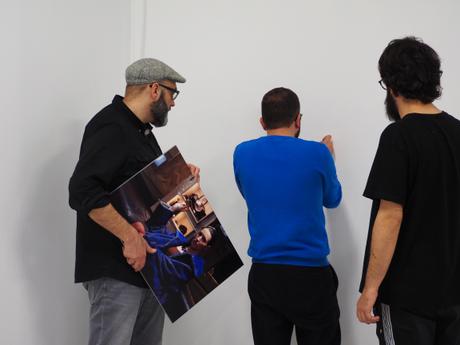 One of the most difficult tasks in installation is placing the vinyl lettering on the walls. When this is done with perfection - straight, not wonky; no letters missing - the labour of it remains invisible. I think it is only fair to show the hard work by several people.

After days of hard work, the opening was the moment of satisfaction. The exhibition was very much appreciated. 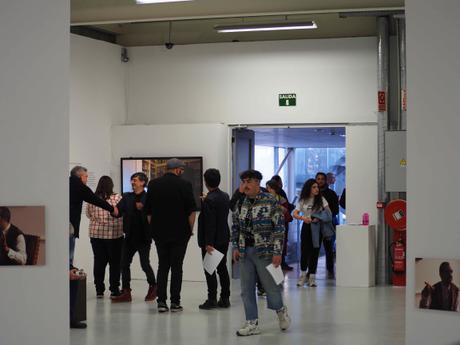 It also led to the goal that visitors would immerse themselves in the images. Even during the busy opening, this woman did precisely that. 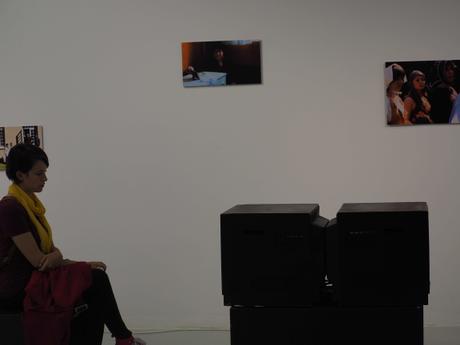 Soon, a catalogue will appear, edited by Miguel, with articles by him, Jill Bennett, Aurora F. Polanco, and of course, Miguel himself, with installation photographs. Jill Bennett writes about the project in terms of “thinking at the edge”, the “edge” in this case denoting the boundary between explicit meaning or systematized knowledge, and the implicit or “unthought known”– the organismic texture of lived experience that exceeds what can be said or categorized. Aurora Polanco addresses anachronism and the importance of focalization, which is primary in my conception of narrative. Miguel’s text addresses the “spaces of relation” that an exhibition constitutes. The exhibition is not organized according to the three film projects but picks up fragments from each that together “theorize” the respective psychic issues, or forms of “madness”. Divided into three spaces – distinct but not separated – it proposes, first, the meaningfulness of deploying the imagination as a help-maid or “squire” of history.My own text further presents the three spaces of relation that the exhibition has composed - not separated but the one leading to the other. Each has a specific theme: “the imagination as “escudera” (help maid) of history”, where the indispensable contribution of the imagination to knowledge is explored: 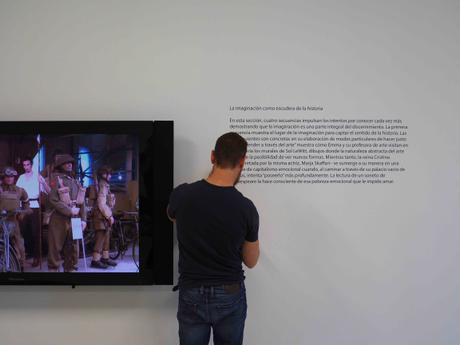 The second space,”the way to madness”, is devoted to emotions, and the possibility that, getting out of hand, they can lead to madness. With that term we avoid to use diagnostic specifications that, as we have learned from Davoine, inevitably entail prognosis and treatment, pharmaceutical and often institutionalizing. Strong emotions can cut off the social bonds, and the resulting isolation is what makes people mad. The first fragment concerns strong anger, bordering on fury, as one example of such a devastatingly forceful emotion. But rather than coming up with a classification of emotions that can make one mad – precisely the kind of “boxes” we want to avoid – the space presents different relationships between emotions and potential madness. Paranoid dreams, the incapacity of communicating, social influences and politics are among the roads that can lead to madness. 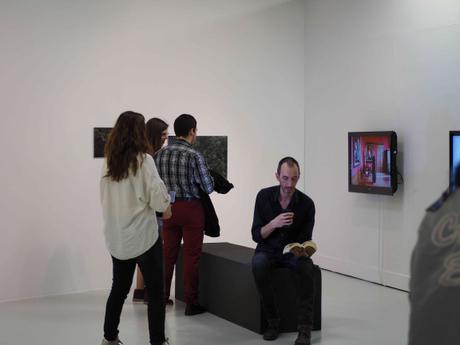 The third space concerns fragments of desire: desires developing, desires being frustrated, and the subsequent emotional capitalism that becomes the fallback option for the frustrated. Here, my theoretical argument is that emotional capitalism thrives when people are trained in expecting what cannot exist: permanent excitement – a contradiction in terms. Emma B is the prototype of this. 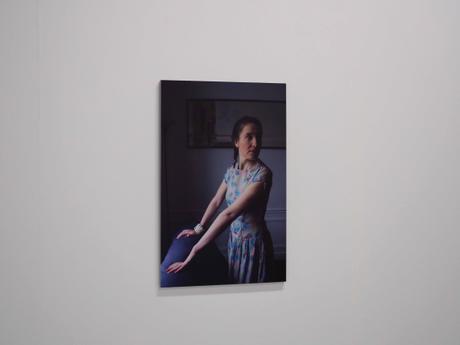 In the sequence on dissatisfied desires, we back-project the attractions that produce the most widespread social syndrome, that in the age of capitalism became “emotional capitalism” (Eva Illouz’s term) to the early-modern days of Descartes. His ambitions, his desire for a majestic dwelling, his longing for the mother who died when he was a baby, all come together in his explorations. But nowhere is the mechanism that ruins people by creating this particular form of social madness more evident than in the MADAME B project. The thread of madness, and the contamination among reading, imagining, and imaging, come together in the three projects. The contamination is increased by the casting, where the main characters of the three projects are played by the same actors. And this thread, as well as the contamination, will, in a different way, also be central to my project I am just beginning: DON QUIXOTE, TRISTES FIGURAS.