Sei mein Zeuge - Be My Witness!
Vienna, VBKÖ, 9-26 May 2012
… is what the woman Sissi, diagnosed as schizophrenic, calls out to her psychoanalyst, right after she has revealed the cause of her troubles. Sissi was the first patient of Françoise Davoine, the analyst and main character – and actress playing herself – in the feature film A Long History of Madness. Like Freud’s Dora, Sissi dismissed Françoise, who seemed incapable of helping her. Twenty years later, and still confined to a psychiatric hospital, Sissi’s “second chance” in the shape of another analyst, slowly but surely allows her to reach into her deepest darkest self. The analyst, this time, is not afraid of putting herself on the line, an identification that allows the unattainable memories to come to the surface.


Initiated and beautifully curated by Austrian artist Nina Hoechtl (who also made the photo on the top here, as well as some of the other photos in the gallery) and her colleagues at the hundred-years old Vereinigung Bildender Künstlerinnen Östenreichs, this small exhibition joined intimacy to a sense of history. It consisted of a wall-filling large projection of Sissi’s Treatment, now titled Eine zweite Chance, a smaller video on a monitor presenting Sissi Outside, and a vitrine with props - jewelry, gloves, a hat, Sissi’s music box - combined with three dresses hanging from the ceiling. This ensemble we titled Sissi’s Skins. The addition of this element further challenged the divide between fiction and reality, or documentary, to which so much of our Mère Folle project devotes attention. Are these objects and clothes real or fictional? Just as Sissi’s utterances are all quotations from real analytical session notes, yet staged and enacted with exuberant theatricality, the question is raised but not answered. 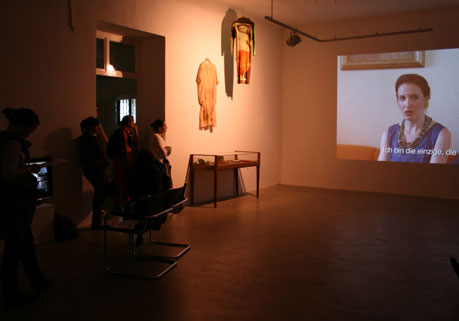 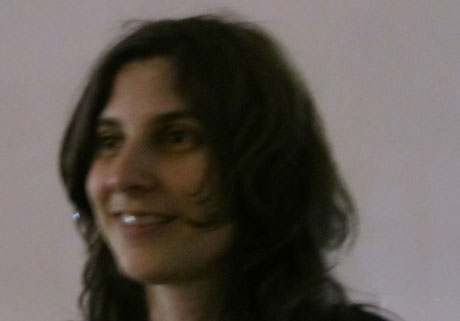